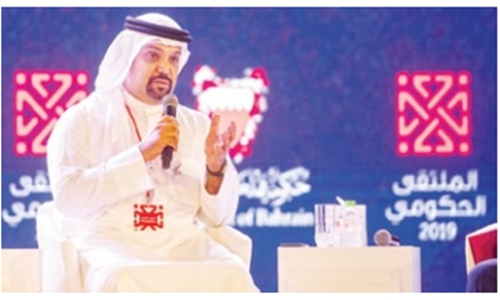 Bahrain ‘on way to achieve fiscal balance by 2022’

The Minister of Finance and National Economy, Shaikh Salman bin Khalifa Al Khalifa, yesterday said that Bahrain is on track to achieve a fiscal balance by 2022. He reiterated that the positive data presented by HRH the Crown Prince during the Government Forum, as well as the timely implementation of the initiatives under the Fiscal Balance Programme, confirm this future goal.

Shaikh Salman highlighted the success of the Government Forum 2019, which was held under the patronage of His Royal Highness Prince Khalifa bin Salman Al Khalifa, the Prime Minister, at the initiative of His Royal Highness Prince Salman bin Hamad Al Khalifa, Crown Prince, Deputy Supreme Commander and First Deputy Prime Minister. The minister noted the importance of the Government Forum in bringing together executives and decision makers to review government achievements and to identify future priorities.

He highlighted that the next development stages require all government entities to implement the directives launched by HRH the Prime Minister and HRH the Crown Prince at the Government Forum. “These decisions highlighted the areas in which further improvements are required to enhance confidence in government delivery.” He affirmed the determination of the Ministry of Finance and National Economy to implement all current and future plans to the highest standards.