Economy ‘on track’ | THE DAILY TRIBUNE | KINGDOM OF BAHRAIN 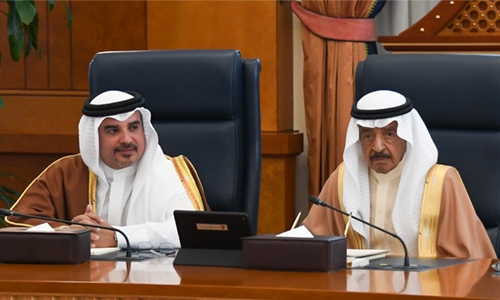 The Cabinet yesterday chaired by His Royal Highness Prime Minister Prince Khalifa bin Salman Al Khalifa in the presence of His Royal Highness Prince Salman bin Hamad Al Khalifa, the Crown Prince, Deputy Supreme Commander and First Deputy Premier, reviewed the quarterly economic report of the Kingdom for the second quarter of 2019, submitted by the Ministry of Finance and National Economy.

The results of the report reflect the continued positive growth of the national economy in parallel with the Fiscal Balance Programme, supported by the diversification and robust performance of non-oil sectors. Performance indicators show that the economy grew by 3.4 per cent compared to the first quarter of 2019, with the real GDP reaching BD 3.24 billion. The non-oil sector recorded a growth rate of 1.2pc at constant prices during the second quarter compared to the same period last year 2018,  while oil sector growth slowed by 0.8pc.

They also reveal that the nonoil sectors continued to support the economic growth in the Kingdom, with the hotels and restaurants sector, which grew by 8.7pc, topping the most developed sectors, followed by the building and construction sector (4pc) and the transportation and telecommunications sector (3.4pc). The positive statistics issued by the Central Bank of Bahrain (CBB) also indicated that the performance of the financial projects sector had posted a 2.6pc growth, which entitles it to lead non-oil sectors regarding their contributions to the Kingdom’s GDP, with 16.4pc. It is followed by the manufacturing sector (14.1pc) and the government services sector (13.3pc).

The session discussed amending the Bahrain Chamber of Commerce and Industry (BCCI) Law within the framework of the kingdom’s efforts to find the most effective initiatives that would encourage investment in all its forms, and respond to the requirements of sustainable development. In this context, Minister of Industry, Commerce and Tourism presented the main features of this amendment, which were included in a draft-law on amending some provisions of Decree Law 48/ 2012 with regard to the Bahrain Chamber of Commerce and Industry.

The bill was referred to the Ministerial Committee for Legal and Legislative Affairs. The Cabinet reviewed a draftlaw on the certification of Marine Stewardship companies, and another on the regulation of the licenses granted to maritime guides and drivers of locomotives in Bahraini ports. Highlighted in a presentation by the Minister of Transportation and Telecommunications, the bills were referred to Ministerial Committee for Legal and Legislative Affairs. The session lauded the outcomes of the fourth Government Forum, held under the patronage of HRH the Prime Minister, and following an initiative by HRH the Crown Prince, praising the Forum’s projects and initiatives aimed at supporting the development of the government action system and building on the previous achievements, a statement by the Cabinet Secretary-General, Dr Yasser Al Nasser, said.

It lauded HRH Premier’s speech at the second edition of the “Bahrain Visions Forum: Shared Visions for a Successful Future”, held at the UN Headquarters recently, commending the Prime Minister’s visions and initiatives that would contribute to the adaptation of the issues of peace and stability in the service of development purposes and to devoting the necessary values to achieve progress in sustainable development.

Bahrain ‘on way to achieve fiscal balance by 2022’