Bahrain-Singapore relations ‘on track’ | THE DAILY TRIBUNE | KINGDOM OF BAHRAIN 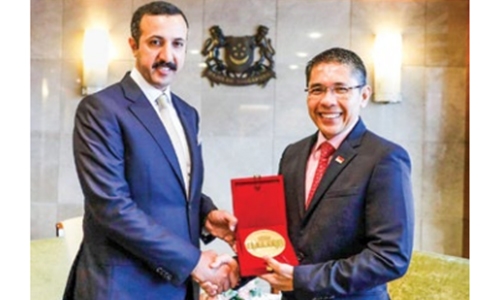 The Senior Minister of State of the Ministry of Defence and Ministry of Foreign Affairs of the Republic of Singapore, Dr Mohamad Maliki Osman, yesterday held talks with the Foreign Ministry Undersecretary for International Affairs, Dr Shaikh Abdullah bin Ahmed Al Khalifa, on the sidelines of his official visit to the Republic of Singapore. The meeting discussed means of advancing bilateral relations and enhancing co-operation.

The two sides also exchanged views on the current regional and international developments. The Undersecretary for International Affairs stressed the Kingdom’s keenness to consolidate relations with the friendly Republic of Singapore to reach a comprehensive and effective partnership. He also added that a pivotal factor in the success of the two countries in terms of pioneering development and achieving a prosperity is through investing in people and qualifying national cadres, affirming that both countries share a common destiny.

Dr Shaikh Abdullah pointed out how Asia occupies an advanced position in the Kingdom of Bahrain’s foreign policy. He also referred in this regard to His Majesty King Hamad bin Isa Al Khalifa’s vision, which was presented to the GCC in 2009, to enhance Asian-Gulf relations in order to achieve mutual benefits. Dr Shaikh Abdullah highlighted how the past three decades have witnessed outstanding development when it comes to maintaining a distinguished and close friendship between the Kingdom of Bahrain and the Republic of Singapore, following the official visits made by the two countries and the signing of co-operation agreements and advancing fields of renewable energy, entrepreneurship, banking, tourism various exhibitions, youth and sports and the provision of quality education and training.

He also showcased the potential to elevate opportunities between both countries in linking investments and technologies to foreign markets in the Gulf and Southeast Asia and motivating the private sector in the field of digital economy. The Undersecretary also reviewed the Kingdom’s distinguished achievements, in light of the comprehensive reform approach led by His Majesty the King, as well as the Kingdom’s success in establishing the rule of law and institutions and maintaining stability and sustainable development.