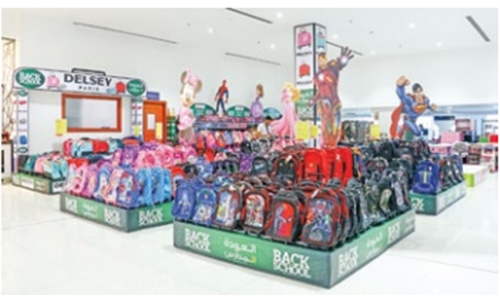 will find instant approval with boys while girls will find a wide choice in Barbie, Dora The Explorer, Lalaloopsy, Frozen, Mary Poppins, Minnie Mouse, Princess, Shimmer and Shine etc. There are also many character themes with universal appeal for girls and boys, such as Lion King, Aladdin, Paw Patrol etc.

“Each year these character school bags and packs – we offer even value packs of themes school books and stationery together – are top of the popularity charts for our young shoppers preparing for school,” said a Lulu Hypermarket spokesman.

“We think it is like taking a friend to school for them and we always stock up on the best characters – this year we have 30 special character bags for boys and 20 for girls and also many that both will find appealing.”  Thehy permarket also stocks a great line of over 100 cool and rugged teenage schoolbags, branded bags from American Tourister, Delsey, Cross, Skybags, Wild Craft, Wagon R, etc.

Get set for the new school term with the best buys from LuLu Hypermarket in all the eight locations: Dana Mall, Riffa, Hidd, Muharraq, Ramli Mall, Juffair, Galleria Mall in Zinj and Atrium Mall in Sar, the retailer said in a statement issued.