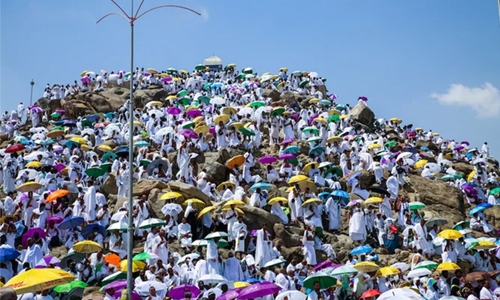 In a statement, the committee lauded the high-level distinguished services delivered by sisterly Saudi Arabia to Hajj pilgrims. The committee affirmed that Saudi Arabia has been keen to provide all kinds of facilities and services to all pilgrims, without discrimination, to enable them to perform Hajj rituals easily, smoothly and comfortably.

Separately, Minister of Health Faeqa Al Saleh sent a cable of congratulations to her Saudi counterpart Dr Tawfiq bin Fawzan Al Rabia on success of the Hajj season. She lauded the efforts of the Saudi Health Ministry in serving the pilgrims despite the great surge in their number. The Health Minister praised the comprehensive preemptive plans put in place by the Saudi Health Ministry to prevent epidemic diseases and help in early detection of important communicable ones.

King Salman received a phone call from Turkish President Recep Tayyip Erdogan congratulating him on the success of Hajj, praising the efforts under the king’s leadership to facilitate the annual pilgrimage for millions of Muslims. King Salman said the Kingdom would do everything it could so that pilgrims could perform their rituals with ease, security and safety, every year. Chechnya President Ramzan Akhmadovich Kadyrov also extended his congratulations to the king and crown prince on Hajj success.

He praised Saudi Arabia for its achievements and services at the holy sites of Arafat, Muzdalifah and Mina, stressing that these efforts were appreciated and welcomed by all Muslims. He said the success of the Hajj was a message to anyone doubting the Kingdom’s leading role in the service of the Two Holy Mosques, calling on all Muslims to support Saudi Arabia in the challenges it faced. The secretary-general of the Arab Red Crescent and Red Cross Organisation, Dr Saleh bin Hamad Al Tuwaijri, also congratulated King Salman, Crown Prince Mohammed bin Salman and Makkah Gov Prince Khalid Al Faisal on the success of this year’s Hajj season.

Mr Al Tuwaijri praised the Kingdom’s massive development projects, which are aimed at serving pilgrims and visitors to the Two Holy Mosques. Egypt’s Parliamentary Affairs Minister Omar Marwan expressed his appreciation for the king and crown prince’s services to Hajj. He said that the good planning and wealth of experience among Saudi authorities and agencies meant that pilgrims were able to move between sites smoothly, as well as perform their Hajj rituals with ease.

The chairman of the African Scholars Forum, Shaikh Mohammed Alhafiz Alnahawi, remarked on the development of services provided to pilgrims in Makkah, the holy sites and Madinah.