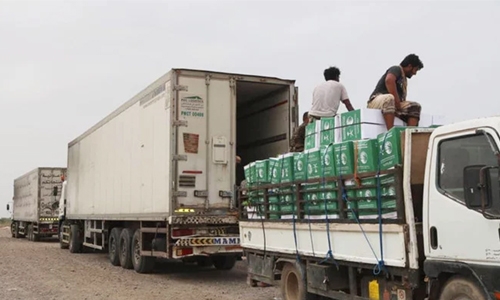 The King Salman Humanitarian Aid and Relief Centre (KSRelief ) distributed the Eid Kiswa (gifts) among children in Yemen as part of its Your Happiness is Our Happiness program in the war-torn country. “KSRelief has distributed toys, clothing and other items to children in the Al Ghaydah and Huswain districts of Al Mahrah governorate,” said the KSRelief media centre.

The centre said the gifts were distributed to 200 families, including 600 orphans and internally displaced people (IDPs) in Al Mahrah. As part of the project, KSRelief also distributed toys, clothing and other gift items to children in the Al Hazam district in Al Jawf governorate, to IDPs from Hodeidah and Raymah, and to children at a centre for special needs in Al Jawf. KSRelief also launched its Eid Kiswa project in the Tuban and Al Houta districts of Lahij and to mark the festive occasion.

Gifts were handed out to children in 303 families, including 319 orphans, children with special needs and IDPs. The centre also implemented its project to distribute gifts, toys, clothing and others in the Hadibu district of Socotra Island. The gifts were distributed among 80 families and included 210 orphans, IDPs and others in need.

‘The Wizard of Oz’ takes fans by storm