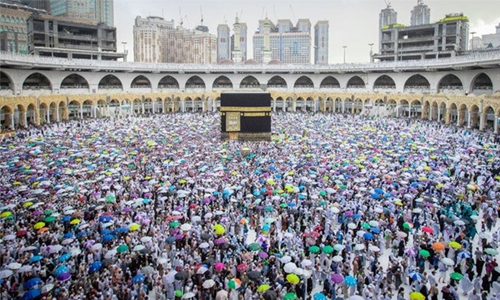 HRH the Crown Prince stressed that King Salman’s dedicated efforts and keenness to harness all available potentials of various sectors had contributed to the success of this year’s Hajj season, and enabled pilgrims to perform the Hajj rituals smoothly and easily. HRH the Crown Prince wished Saudi Arabia and its brotherly people many happy returns of the occasion, under King Salman’s leadership.

In this regard, the speaker lauded the tremendous efforts exerted by Saudi Arabia, under King Salman’s leadership, to ensure easy and smooth performance of Hajj rituals, citing the facilities provided by the Saudi government for Hajj pilgrims, which, she said, reflects its leading role in serving Arab and Islamic issues at all levels. She affirmed that Saudi Arabia’s keenness to harness all its potentials to serve pilgrims is a Saudi message to the whole world highlighting its leading role in promoting the principles of Islam and tolerance.

She extended deepest thanks and appreciation to the Saudi people and government for the distinguished and effective procedures they have taken to ensure the success of the Hajj season. The speaker extended sincere thanks and appreciation to His Majesty King Hamad bin Isa Al Khalifa for his sound directives to the Bahrain Hajj Mission to provide all kinds of care for Bahraini pilgrims.