A champion of peace | THE DAILY TRIBUNE | KINGDOM OF BAHRAIN 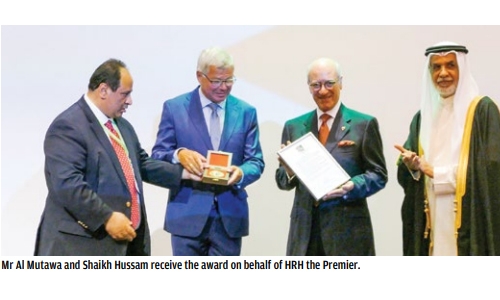 A champion of peace

His Royal Highness Prime Minister Prince Khalifa bin Salman Al Khalifa has been granted the ‘Norwegian Guest of Honour’ award 2019 by the 14th August Committee of Norway, in recognition of his efforts to promote regional and global peace, security, tolerance and harmony.

The prestigious award was granted during a ceremony held in the Norwegian Capital, under the patronage of Norway’s Prime Minister, Erna Solberg, and in the presence of Cabinet Affairs Minister, Mohammed bin Ibrahim Al Mutawa, the Chairman of the ‘HRH Prince Khalifa bin Salman Al Khalifa Award for Sustainable Development’, Shaikh Hussam bin Isa Al Khalifa, in addition to an elite of Norwegian personalities and officials.

During the ceremony, the Chairman of the Dialogue for Peace foundation and President of the 14th August Committee of Norway, Aamir Javed Sheikh, delivered a speech in which he lauded HRH Premier’s efforts and achievements in consolidating the International Community’s steps aimed at ensuring a stable and secure world in which peace and co-existence among all countries and peoples prevail. “HRH Premier’s contributions and vision on the complementarity between achieving peace and implementing the Sustainable Development Goals have gone beyond the borders of the Kingdom of Bahrain to become a global model that is worthy of respect and appreciation,” he said.

Then, former Norwegian Prime Minister and President of the Oslo Centre for Peace and Human Rights, Kjell Magne Bondevik, delivered a speech in which he affirmed that “HRH the Prime Minister has been doing his best for decades with a view to raising the standard of living in the Kingdom of Bahrain by focusing on sustainable development and modernisation, as well as on achieving an all-inclusive and comprehensive sustainable economic development”. He added that HRH Premier’s efforts have covered many areas, including the enhancement of the role of women in Bahrain, and the consolidation of the pillars of peaceful co-existence and tolerance there.

He affirmed that United Nations General Assembly had recently endorsed HRH Premier’s initiative to designate April 5 of each year as an ‘International Day of Conscience’ to promote the culture of peace. “In recognition of all these efforts and other achievements, His Royal Highness Prince Khalifa bin Salman Al Khalifa, the distinguished Prime Minister of Bahrain, has been awarded the ‘Norwegian Guest of Honour Award of 2019’,’’ he said. He pointed out that he has visited Bahrain and met HRH Prince Khalifa bin Salman Al Khalifa, stressing that “the Kingdom of Bahrain is a country with a long history dating back thousands of years.”

“After its independence, Bahrain has gradually moved towards democracy and has, since 2002, a National Assembly with two chambers, one of which is elected and the other is appointed by His Majesty King Hamad bin Isa Al Khalifa,” he said, lauding the Kingdom’s strategic location and progress in various fields. After that, a film including a message from HRH the Prime Minister to the participants in the ceremony was screened.

In his message, HRH Premier expressed thanks and appreciation for the honour. While tackling the Kingdom’s vision, the Prime Minister stressed that Bahrain attaches great importance to joint international action for the sake of promoting global peace, and supporting under-developed countries and peoples in their efforts to achieve development.

Then, the Cabinet Affairs Minister delivered a statement in which he conveyed HRH Premier’s thanks and appreciation to the event organisers for selecting him as the ‘Guest of Honour’ of the ceremony which, he said, carries many noble goals, all of which aiming to spread the values of co-existence, security and stability among peoples of the entire world.

Under the leadership of His Majesty King Hamad bin Isa Al Khalifa, the kingdom has been keen to participate in international efforts and gatherings aimed at contributing to promoting such noble values, out of its belief that communities are in dire need for security and peace, as well as for ending conflicts annd tensions in order to focus on achieving sustainable development and decent living for their peoples.

Mr Al Mutawa stressed that the UN’s adoption of HRH Premier’s initiative to declare the April 5th as an International Day of Conscience is a living proof of Bahrain’s contributions to international efforts to promote the values of peace across the world.  He indicated that the ceremony is part of its organisers’ efforts to enhance partnership for the sake of spreading the values of co-existence and peace, commending the efforts of the Oslo Centre for Peace and Human Rights, the Dialogue for Peace foundation and the 14th August Committee of Norway for their effective role and good efforts, and wishing them further success.

Minister Al Mutawa and Shaikh Hussam bin Isa received the award, on behalf of HRH Premier, from the former Norwegian Prime Minister and President of the Oslo Centre for Peace and Human Rights, Kjell Magne Bondevik.