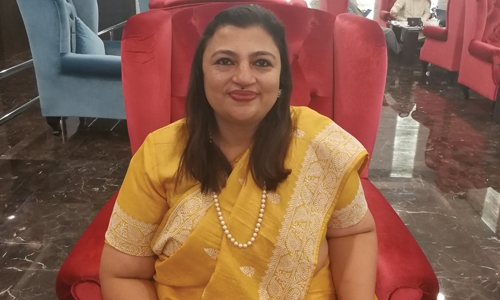 Indian cultural centre to come up in Bahrain

Manama : A new BD58000 Indian cultural centre could soon be built in Bahrain for the Kannada community, a government official from India said.

The cultural centre, which will cater to the Kannada community will help bring together over 50 official and unofficial Kannada groups.

The details were revealed to DT News by Dr. Arathi Krishna, Deputy Chairman of Non Resident Forum, Government of Karnataka, India, who was in Bahrain yesterday.

However, community members are hoping to receive more funds from the government of India.

Dr. Krishna, who held meetings with several Kannada communities in the Kingdom, said that, “The members have shared many concerns, needs and wants. One of the things they would like see is a new community centre. Currently, there are many Kannada groups in the kingdom, but they would like to a place where they can all come together.”

The previous government in Karnataka had given them about 1 crore Indian rupees but their estimate is that they will need 10 crores to build the centre. “During the meeting the community members requested me to help obtain a further 5 crore Indian rupees funding from the government. They want the works to be underway within the next year and are also collecting funds from the members as well,” Dr. Krishna added.

She has requested help from the Indian Ambassador Alok Kumar Sinha to support the local efforts, which he has agreed to.

She said that there are around 20,000 people from Karnataka in Bahrain.

During the meeting the community members made a request to the Karnataka government to allot land in India where NRI’s could purchase and build houses.

They also requested a cut in the huge fees charged by educational institutions where NRIs have to pay a lot more than citizens residing in the country. They also requested to allow NRI students to be eligible for local examinations at the institutes.

Dr. Krishna, who also received a similar concern from the community in Saudi, assured them that she would take the matter up with the education minister.

The community members have also complained about the number of flights from Bahrain to Mangalore and Bangalore and have also expressed their concern about being treated unfairly at the Mangalore airport.