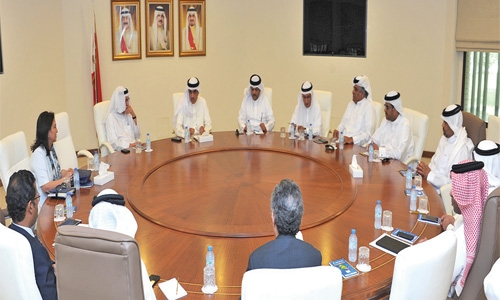 The minister also voiced deep pride in the Qatari citizens, being the cornerstones of the social system of the peoples of Gulf Cooperation Council (GCC) countries.

Meeting the representatives from the Bahraini Press and media, including editors-in-chief of local newspapers and columnists, Al-Rumaihi extended sincere thanks to journalists and media professionals in Bahrain, stressing that they have set the example in loyalty, national belonging and patriotism thanks to their unwavering keenness on national, Gulf Cooperation Council (GCC) and Arab unity.

“What the national press and media outlets are doing is exactly the patriotic role that they are expected to play in responding to allegations, fallacies and fabricated reports disseminated by biased and tendentious media against the Kingdom of Bahrain,” he said.

“The reports and coverage by the national media in Bahrain are not directed in any way against the brothers in the State of Qatar, but against Qatar’s terrorism-supporting policies and in response to the false accusations made by its media, particularly Al-Jazeera channel.”

The Bahraini media are also exposing Qatar’s media policy which has, for years, strove to distort facts in the Kingdom of Bahrain by disseminating false and baseless accusations under shiny, misleading and inaccurate pretexts, such as freedom of expression and opinion and inclusive opinions, he added.

The minister affirmed the pride of Bahrain –leaders, government and people- in the Qatari people who represents a cornerstone in the social system of GCC peoples, and even the Arab people to which everyone is proud to belong.

He asserted that the “poisonous” pens in the Qatari media have been trying to exploit the current crisis to drive wedges between GCC peoples, and try to show that what is happening is directed against the Qatari people, without paying heed to the keenness of the leadership on the security, stability and interests of the brotherly Qatari people, as clearly reflected in the royal order to ensure easy procedures for joint families and to take humanitarian cases into consideration.

Al-Rumaihi re-affirmed the national fundamentals on which Bahrain’s cultural and humanitarian message is based, which has turned the kingdom, throughout history, into a beacon of freedom, tolerance, peaceful and mutual acceptance.

He stressed that Bahrain, while proud of its GCC and Arab dimensions, contributes effectively to the global humanitarian message.