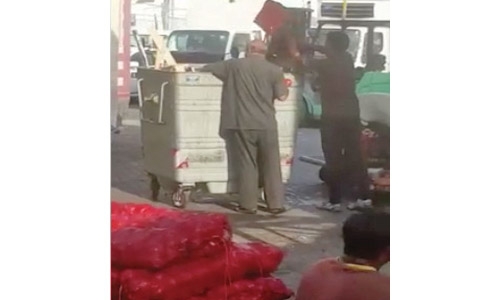 “He was searching for tomatoes inside the trash bin to take with him,” the voice in the video said.

The video that lasted over a minute showed the man scrounging the garbage bin at a crowded area. Another man helps him pack what they collected from the garbage bin. The video abruptly cuts off as the man recording the video moves towards the men.

The video has been submitted to Bahrain Human Rights Watch Society (BHRWS). The BHRWS has launched an awareness campaign titled ‘Be right, Know your rights’, to educate citizens about their rights and enable them to take action whenever they see such malpractices.

“We are launching this campaign to highlight the rights of the citizens and to correct wrong practices,” BHRWS stated.

The Society urged residents to record videos when they come across any such wrongdoing. To participate in the campaign, one can send such videos to the Whatsapp number 336633882 or 336455424.