Bahrain, US for greater security ties | THE DAILY TRIBUNE | KINGDOM OF BAHRAIN 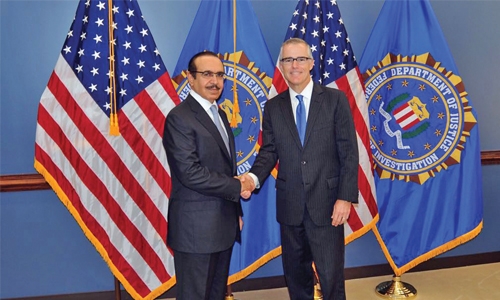 Bahrain, US for greater security ties

Manama : The Interior Minister, Lieutenant General Shaikh Rashid bin Abdulla Al Khalifa, this week conducted an official visit to the United States, during which he met a number of officials from the US’ executive and legislative authorities.

The Minister of Interior provided briefings on the sustained Iranian interference that Bahrain and countries within the region continue to affected by. The Minister noted the wide-ranging intelligence materials that evidence Iran’s support to extremist and sectarian cells. The available evidence, the Minister emphasised, includes large amounts of terror-related materials seized in a number of raids in Bahrain.

Shaikh Rashid outlined the steps taken by the Interior Ministry to modernise its security procedures and to reinforce security cooperation and the exchange of expertise across the countries’ counter-terrorism departments.  The Interior Minister’s and the Secretary of Homeland Security’s discussion also focused on the MoU signed between the two departments in 2007.

They also affirmed their support to Bahrain in its steps to confront the Iranian threat and hegemony which, they said, needed to be addressed through various means. The meetings were also attended by Bahrain Ambassador to the US Shaikh Abdullah bin Rashid Al Khalifa.

Seven companies in the dock for forging documents