One dead, dozens injured in stampede in Iraq's Basra before Gulf Cup final | THE DAILY TRIBUNE | KINGDOM OF BAHRAIN 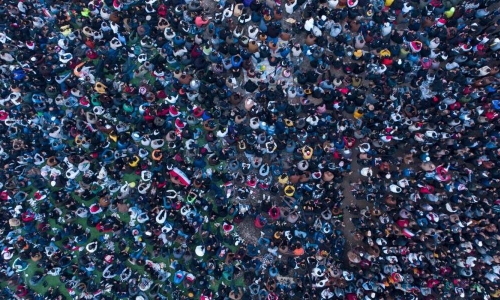 One dead, dozens injured in stampede in Iraq's Basra before Gulf Cup final

One person was killed and dozens injured Thursday when a stampede broke out outside a football stadium in Iraq hours before the Gulf Cup final, medical and security sources said.

Long banned from hosting international football matches, war-torn Iraq had been counting on its hosting of the Gulf Cup to burnish its image but it had already been forced to apologise for organisational lapses.

Thousands of fans without tickets had gathered outside the stadium in Iraq's main southern city of Basra since dawn in the hope of watching the final between Iraq and Oman, which was due to kick off at 7:00 pm (1600 GMT).

"There has been one death and dozens of slight injuries," a medic said.

An interior ministry official gave the same toll. "A large number of fans, many of them without tickets, had gathered since first light to try to get in," the official said.

An AFP photographer inside the stadium said the turnstiles were still closed when the stampede broke out. Sirens blared as ambulances arrived to ferry the injured to hospital.

Images posted on social media showed a sea of people outside the stadium.

Iraq was already forced to apologise to its neighbour Kuwait after a scuffle in the VIP section prevented its leader's representative from attending the opening ceremony earlier this month.

India set to overtake China as world's most populous nation