No fuel, no hope as Sri Lankans flee crisis in mass brain drain | THE DAILY TRIBUNE | KINGDOM OF BAHRAIN 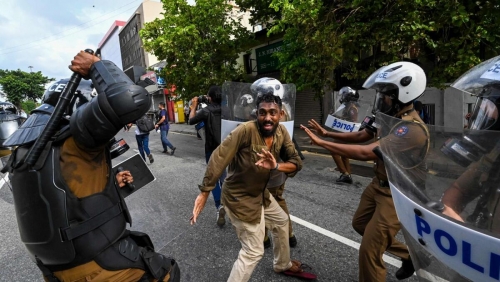 Shamla Yoosoof, an investment researcher from Colombo, left Sri Lanka with her three-year-old son and a jam-packed suitcase, swapping economic chaos at home for a new start in Dubai.

She flew out in June to join her husband who had secured a job as a sales and marketing director there weeks before - one of tens of thousands of Sri Lankan professionals escaping the country's worst economic crisis in seven decades.

Although the exact number of migrants was unavailable, both preliminary data and business leaders suggested the scale of the brain drain was serious enough to delay any economic recovery.

Yoosoof, for one, did not know when - or if - they would ever be back.

"It took a long time to convince my husband (to leave Sri Lanka) because he was someone who believed in the country and wanted to stay," said the 30-year-old.

But by March, she said the crisis - which saw fuel shortages spiral into economic meltdown alongside political protests that ousted the president - had made daily life too hard.

"We realised that if we do not jump ship (soon) it was going to be difficult for us (to leave the country)."

From Tunisia to Haiti to Pakistan, spiralling inflation is driving millions into poverty worldwide, sparking protests and mass unrest, with even rich countries feeling the squeeze.

Since March, Sri Lankans have faced severe shortages of fuel and cooking gas due to fast-dwindling foreign currency reserves. Medicine and food essentials such as milk powder ran short and unrest swelled against the powers that be.

Fuel was only available for essential services such as healthcare and farming for most of July. Food prices soared, with year-on-year food inflation at more than 90 per cent in July, and consumer price inflation at 60.8 per cent, year on year.

On top of the daily grind, migrants said they had lost faith in government and feared that rising nationalism would favour the feckless at the polls, hastening the middle-class exodus.

Hence the rush to a better life by many of the island's most skilled professionals - medics, software engineers, scientists - creating a worrying skills gap for the 22 million left behind. "There is an emerging trend of departure of skilled migrant workers," said Dr Bilesha Weeraratne, Head of Migration and Urbanization Policy Research at the Institute of Policy Studies (IPS).

The immigration office would not confirm the numbers despite repeated requests - but long queues outside passport offices are now a common sight.

In the first five months of 2022, Sri Lanka has issued 288,645 passports compared with 91,331 in the same period last year, according to government data.

Such outsourced services, mostly in tech, are one of the island's biggest foreign exchange earners. But the currency shift has not much helped, industry leaders say.

Sanjiva Weerawarana, chief executive officer of WSO2, a Colombo-based software solutions firm with 850 full-time employees, said the company had lost about 10% of its workforce this year as staff chose to leave for work or study.

"When we asked (employees) who wants to go, more than half of them (said they want to migrate). We will only know the real impact in another six months," he said.

Hoping to persuade potential migrants to stay put, his firm is offering to match what they might earn overseas while cutting other payroll costs to balance the books.

"We are looking to accommodate as many of these individuals as possible," he said of an offer that could never be universal.

The Sri Lankan government also rolled out a "Work Abroad" programme in June in a bid to earn more remittances while pruning public sector expenditure during the meltdown.

It now lets public servants work abroad on unpaid leave for five years, so long as the workers deposit part of their foreign earnings in a Sri Lankan bank account set up in their own name. The government gains extra remittances, while employees accrue future promotion and pension benefits in place of current pay.

Remittances are an important source of foreign exchange for Sri Lanka. By 2018, the country received over $7 billion in remittances, close to 8% of the country's GDP, according to IPS data.

Its other big foreign currency earners are the garment industry, IT, tea, coconut, rubber, spice and tourism.

But Weeraratne of IPS calls skilled migration "a double- edged sword" as higher overseas earning could increase money flows into the island, yet if too many people flee, a dearth of relatives left behind could also shrink what is sent home.

"Unplanned and excessive outflow of skilled workers would have a negative impact on Sri Lanka's economic recovery efforts too," she added.

Fallout from the fuel shortages, be it lengthy, daily power cuts or the loss of free movement, was the key trigger cited by professionals leaving in droves.

In March, power cuts sometimes lasted for over half a day.

"I struggle with anxiety and postpartum depression, and I used to plan my work around the power cut schedule," Yoosoof said.

When power cuts did not stick to the schedule, Yoosoof said she became anxious and had panic attacks.

Then a lack of transport short-circuited her son's school life, while staying home left him "restless and angry".

A doctor at a Colombo-based hospital, who did not wish to be named, said a number of colleagues, both nurses and doctors, had already migrated this year, with more to follow.

"It takes years to train competent health staff, especially when it comes to (handling) surgeries and emergencies," she said. "(Migration) will have a big impact on the quality of healthcare."

Economic frustrations are not the only driver behind the exodus, according to a 31-year-old equity research analyst who is leaving for Britain in October.

The Colombo resident, a Muslim minority in a strong Buddhist majority, said he had "lost hope in the people" and did not trust fellow Sri Lankans to vote in a competent government.

"We are just going to end up voting for the worst of them (politicians) all over again because nationalist sentiment is going to prevail," said the analyst, who did not wish to be named over fears that it could hamper his migration prospects.

For Yoosoof, saying goodbye to her home has been tough.

"I feel sad because I am a product of the free education system of Sri Lanka. But now I am unable to contribute to my own economy," she said.

"If we remain here, I'm not sure if (my son) would've had access to the same quality education. So we had to make a choice to move out to provide a better life for our child."Thomson Reuters