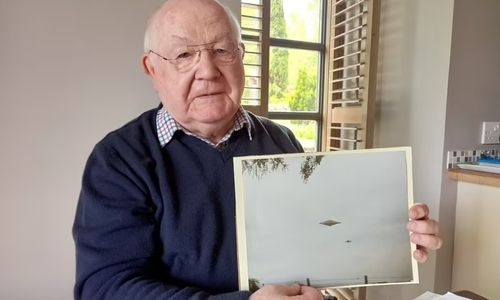 On August 4, 1990, two young men were working as chefs in a hotel in Pitlochry, a beautiful Highland Perthshire town, just outside the Cairngorms National Park in Scotland. At 9pm, after a long day in a hot kitchen, they drove about 13 miles north along the A9 to Calvine, a spot on the edge of the Cairngorms, for a walk in the hills.

They hadn’t gone far when they saw a huge, solid, diamond-shaped object, about 100ft long, hovering silently in the sky above them. Terrified, they hid in some bushes and looked up. Minutes later, they heard the scream of a jet aircraft going north: In 1990, RAF Leuchars in Fife had two squadrons of Tornado fighters on 24-hour standby to intercept Russian intruder aircraft.

The jet came back and circled the ‘thing’ before heading off on its original course, as if the pilot had seen the object too and had come back for a closer look. Eventually the two men stuck their camera out from where they were hiding and fired off six frames. At that point, the object shot vertically upwards and disappeared way, way up into the sky.

Convinced they’d just seen a UFO, they took their photos to the Daily Record, one of Scotland’s leading newspapers. But no story was ever printed: The paper passed the pictures on to the Ministry of Defence. And then, the photographs simply vanished — along with the two young chefs. Until now. Here, for the first time, we can reveal that missing picture — a photograph one MoD insider described as the most spectacular UFO picture ever captured, and the Holy Grail in terms of hard evidence that these things really exist.

It’s a picture the MoD and The National Archives have tried their utmost to keep hidden. While the information would normally have been released after 30 years, the Ministry has not released the original photo and wants the names of the witnesses sealed for a further 54 years — until 2076 — because of ‘privacy concerns’.