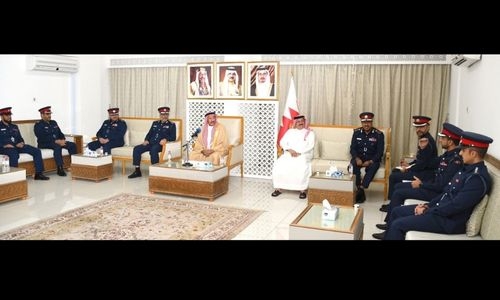 Muharraq Police arrested 70 people since the start of this year as part of a crackdown on beggars in the area, said a top official. Muharraq Governorate Police Director General Brigadier Saleh bin Rashid Al Dosari said that most of the arrested were foreign nationals.

“We have deported all of them after taking necessary legal measures,” he said. He said the directorate is also carrying out a series of inspection campaigns to root out t illegal employment in association with the Labour Market Regulatory Authority and the Nationality, Passports and Residence Affairs.

Al Dosari was presenting a report on actions against beggary in the directorate during a security committee meeting chaired by Salman bin Isa bin Hindi Al-Mannai, Muharraq Governor. During the meeting, Bin Hindi stressed the importance of intensifying security campaigns to deter this phenomenon.

He had also directed authorities to crackdown on beggars in markets and vital places, especially at tourist spots, where they create a nuisance to those who refuse to pay alms. Directing to take action, Al-Mannai stressed the importance of intensifying security campaigns to deter this phenomenon.

“These vehicles are creating grave threats to the lives of residents and riders themselves, he said, citing their non-compliance with laws, security and safety procedures. “Riders of such vehicles are causing traffic chaos where they go,” he said.

Not just in Muharraq!

The Daily Tribune has earlier reported the issue of beggary in Manama and Gudaibiya and the inconvenience they cause to citizens and residents. Mostly women carrying small children are seen roaming the streets in those areas, where they allegedly even enter shops asking for money from shopkeepers and customers.

However, people in the area had told Tribune that they are not seeing it as a crime but as a “social problem”. They also described the issue as a “recent phenomenon.” People have told Tribune that some of them look like coming from reasonably good families.

However, when brought the issue to the notice of Dr Anna Mostafa, a leading psychologist in the Kingdom, the doctor pointed fingers at psychological factors as “no one would want to beg or want to be destitute.” “Perhaps there are unaware of the resources available to them by charities and shelters to support them.”The doctor has also stressed the need for increasing campaigns on service available.

Is begging a lucrative activity?

Reports also point fingers in this direction. Several reports say that begging has become lucrative for many in the Gulf, especially foreigners. A recent report by Gulf News says that Dubai police have arrested a female beggar from Mecca with around SR117,000 in her possession. She also had with her cash in various currencies as well as gold jewellery.