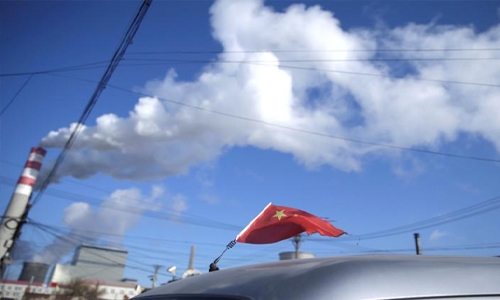 A carbon price that starts low and rises steadily could help Asian countries reach their targets under the Paris climate accord over the next decade, the head of the International Monetary Fund said yesterday, citing new IMF research.

IMF Managing Director Kristalina Georgieva told an event hosted by the People’s Bank of China that there was a growing consensus that carbon pricing was the most efficient and cost-effective way to curbing emissions.

The IMF is urging the world’s largest emitters to adopt carbon price floors to ensure more substantial climate change mitigation, she said. London-based climate data provider TransitionZero on Thursday said China needs to halve carbon dioxide emissions from its coal-fired power plants by the end of the decade if it is to remain on course to become carbon neutral by 2060.

Georgieva said changes were critical in Asia, which is home to the majority of the world’s population and accounts for almost half of the world’s carbon emissions.

The Asia-Pacific region is already experiencing faster-rising temperatures and more weather-related natural disasters than anywhere else, and climate change is a key driver of rising poverty and worsening food insecurity, she said. But accelerating the switch to greener economies could help boost the economic recovery from the coronavirus crisis.

Carbon taxes could also generate substantial revenues, but countries could use other instruments, such as China’s coal tax, which could eventually be scaled up to curb CO2 emissions. Georgieva said China was taking “a major step forward” with its national carbon emissions trading system for the power sector.

Over time, she said, China could put a cap on total emissions, adopt more ambitious targets and extend the system beyond the power sector.