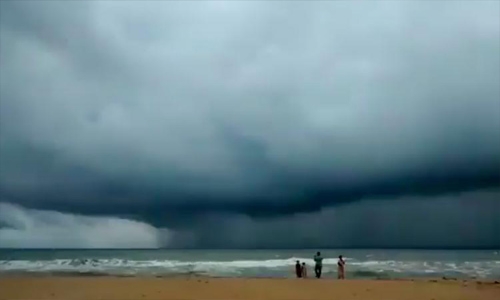 In its 11.30 pm bulletin, the IMD said the "centre of the cyclone is set to cross the coast near Puducherry within next three hours at wind speeds of 120 to 130 kmph gusting to 145 kmph."

The wall cloud bands in the forward sector are entering into land and the weather system is interacting with the land surface, it said.

The bus, rail and flight services remain suspended in Chennai, Cuddalore, Villupuram, Chengalpattu, Puducherry and Karaikal and the governments of Tamil Nadu and Puducherry have asked the people not to venture out of their homes, as per the newspaper. The Puducherry government had earlier imposed Section 144 (prohibiting the assembly of more than four people).

Before the very severe cyclonic storm Nivar made landfall, residents of one of the worst-hit areas during the 2015 deluge in Chennai found a flyover the safer place to park their cars to avert their vehicles from getting submerged.

Determined to avoid a repeat of the 2015 scenario when scores of four-wheelers were filled with floodwaters, several residents of Madipakkam in the southern part of the city left their vehicles on the margins of the bridge overlooking the Mass Rapid Transit System railway station in nearby Velacherry.

With the owners one after the other parking their vehicles, the bridge was lined up with swanky cars on both sides of the overpass presenting a never before seen spectacle, civic workers said.

With rains under the influence of the cyclone drenching Chennai and several other parts of the state, authorities evacuated over one lakh people and housed them in shelters besides disconnecting power supply in vulnerable areas as a precautionary measure.

Thursday was declared a public holiday for 16 districts in Tamil Nadu and in Puducherry and Karaikal regions by the governments in the state and the Union Territory respectively and people were asked to stay indoors till the storm crossed.

The gates of Chembarambakkam reservoir near Chennai were opened for the first time in five years as a precautionary measure, releasing a torrent of surplus water into the Adyar river after its storage was just 20 per cent short of its capacity due to heavy rains ahead of the incoming cyclone.

As the surplus waters gushed forth with the opening of shutters, Tamil Nadu chief minister K Palaniswami inspected the dam premises and reviewed the precautionary measures and the outflow.

Palaniswami said he advised the officials to "carry out their work cautiously and without causing any inconvenience to the people."

On the dam's water level, the chief minister told reporters that it has reached 21.5 feet as against its maximum of 24 feet.

"The Adyar River could carry up to 60,000 cusecs and people need not have any apprehensions. All precautions have been taken," he said and pointed out that approximately, only 6,000 cusecs now flowed in the river.

PWD officials said 1,000 cusecs was released from the lake initially as the water level stood at 22 feet against the maximum total 24 feet while the storage reached 80 per cent of its capacity. By 8 pm, the water release was gradually increased to 5,000 cusecs, they said.

The Chembarambakkam reservoir, among the four very important drinking water sources to Chennai, is spread across 25.51 square kilometres and is located in Kancheepuram district's Kundrathur taluk. Poondi, Cholavaram and Red Hills are the other reservoirs.

The Adyar River empties into the sea, traversing city localities like Kotturpuram and suburban neighbourhoods including Sirugalathur and Kundrathur.

People, who gathered eagerly to witness the water release along the river bank was advised by the authorities to move away considering their safety while intermittent rains lashed the city and suburbs. The Greater Chennai Corporation said it has cleaned up the Adyar creek besides other canals and lakes like Mambalam and Velachery respectively. The GCC said it has already advised people living close to the river like those in Jafferkhanpet to move to its shelters adding "169 shelters are open and ready." For assistance, people may contact them at 044-25384530 and 044-25384540, the GCC said.

Delayed opening of the reservoir in 2015 after very heavy rains was seen as a trigger for the devastating floods that hit the city then, though the government had rejected it.

Tamil Nadu revenue minister RB Udhayakumar and officials said over 1.21 lakh people, including children, have been housed in 1,000 relief centres in various districts, including Nagapattinam, Cuddalore and Villupuram districts. Food, water and all other essentials including masks to help prevent coronavirus have been made available to them in the relief centres, he said.

As a precautionary measure, electricity distribution was stopped in several regions and especially in areas that have overhead power transmission lines. Civic authorities meanwhile removed banners and hoardings in several districts including Chennai and Vellore expecting squally winds.

Chennai airport shut till 7 am

The Chennai international airport has been closed till 7 am on Thursday amid bad weather conditions caused by Cyclone Nivar, the civil aviation ministry said. Gusty winds and rains lashed parts of Tamil Nadu on Wednesday, leaving several areas inundated.

"As a measure of safety and precaution, the Chennai Airport has been temporarily closed from 1900 to 0700 hrs IST due to the bad weather conditions caused by Cyclone Nivar. Due coordination was done with all stakeholders," the civil aviation ministry said on Twitter.

The Chennai Metro Rail, which operated minimum services, ended it at 8 pm and said usual operations would resume tomorrow
depending on the weather.

Under the influence of the cyclone, coastal and north interior Tamil Nadu, Puducherry and Karaikal regions are likely to receive rainfall at most places with heavy to very heavy showers at a few places and extremely heavy rains at isolated places, the IMD said. South coastal Andhra Pradesh was also set to witness showers at most places.

Rainfall is expected to continue in many places in these regions on Thursday too with heavy rainfall at some places.

Chennai and its suburbs, which received heavy overnight rains, continued to witness intermittent showers coupled with strong winds with low-lying areas getting inundated and water entering houses in such localities.

Civic body officials said stagnant water was pumped out by deploying heavy-duty motors and fallen trees were being removed immediately.

In Puducherry, Chief Minister V Narayanasamy visited some coastal villages to monitor steps taken to ensure the safety of fishermen community as the government said the administrative machinery is fully geared to meet any exigency. Prohibitory orders under section 144 CrPC have been clamped in Puducherry region from Tuesday night till 6 am on Thursday to restrict the movement of people.

Parts of the UT have been experiencing intermittent moderate rains since Tuesday night under the influence of the cyclonic storm. People living in low-lying areas or residing close to the seashore were being evacuated to safer places or to 200 relief camps set up in Puducherry region with basic amenities, including food.

Palaniswami said all precautionary measures have been taken in view of the cyclone and so far 400 people have been accommodated here in relief shelters. Waterlogging has been reported from 30 low-lying areas and GCC has deployed heavy-duty motor pumps to drain the rainwater, he said. Also, electricity poles that were affected in city localities have been set right immediately by electricity corporation personnel, he said and appreciated government employees for their work.

City police said 12 teams, led by sub-inspectors of Armed Reserve, with necessary equipment and boats have been deployed for relief work. Police appealed to the people to seek their assistance, if needed by contacting the temporary control room at 9498181239. As many as 38 uprooted trees were removed by them with the assistance of GCC and disaster relief workers, they said.

Over one lakh people have been evacuated from the coastal areas of Tamil Nadu and Puducherry in order to "tide over the worst challenge" put up by Cyclone Nivar that is expected to make a landfall in the early hours of Thursday, the NDRF chief said on Wednesday.

The National Disaster Response Force has earmarked a total of 50 teams, with 30 being deployed on the ground in Tamil Nadu, Puducherry and Andhra Pradesh.

Twenty teams have been kept on standby at Vijaywada (Andhra Pradesh), Cuttack (Odisha) and Thrissur (Kerala). SN Pradhan, the director-general of the federal disaster response force, said all preparations have been done to "tide over the worst challenge that is put up by the cyclone".

He said there is "perfect coordination" between the state and central authorities which are monitoring the cyclone and the force is prepared with equipment such as cutters and boats to help rescue those trapped and ensure resumption of normal life.

"A total of 25 NDRF teams are deployed on the likely affected coastal areas of Tamil Nadu, Puducherry and Andhra Pradesh after consultation with state authorities.

"Out of these, 15 teams have been deployed in coastal districts of Tamil Nadu. Six have been positioned at Cuddalore, three at Viluppuram, two teams each at Chennai and Chengalpattu, while one team each at Mayiladuthurai and Nagapattinam districts," an NDRF spokesperson said.

Sensing severity of the situation, five additional NDRF teams have also been kept on alert at Vijayawada and two teams at Vishakhapatnam for immediate backup, he said. "In view of the current COVID-19 scenario, NDRF teams are equipped with appropriate PPE/special kits," he added.

The landfall of the very severe cyclonic storm Nivar commenced on Wednesday night, the India Meteorological Department tweeted.
The centre of the cyclone will cross the coast near Puducherry within next three hours with a wind speed of 120-130kmph gusting up to 145kmph. S Balachandran, deputy director general of India Meteorological Department (IMD)-Chennai, said the landfall would happen around 30km north of Puducherry. The landfall is happening near Marakkanam.
The centre moved north-westwards with a speed of 15 kmph during the past six hours.

Experts said the system might move over the land with some level of intensity for 12 to 18 hours after landfall, which means gusty winds and sudden intense spells of rainfall may continue on Thursday.

“If the cyclone crosses by November 26 morning, it will completely weaken by November 27 evening,” said YEA Raj, former deputy director general of India Meteorological Department. However, the time taken for the system to move over the land depends on the availability of moisture over land and terrain.The landfall of the very severe cyclonic sto ..


Read more at:
http://timesofindia.indiatimes.com/articleshow/79415781.cms?utm_source=contentofinterest&utm_medium=text&utm_campaign=cppst
The landfall of the very severe cyclonic sto ..


Read more at:
http://timesofindia.indiatimes.com/articleshow/79415781.cms?utm_source=contentofinterest&utm_medium=text&utm_campaign=cppst
The landfall of the very severe cyclonic sto ..