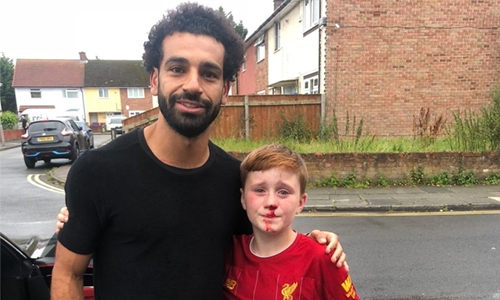 A young Liverpool supporter’s attempt to get a glimpse of his hero Mohamed Salah left him with a bloodied nose but the pain was quickly forgotten when the Egyptian striker showed his compassionate side by posing for photos.

Louis Fowler, 11, crashed into a lamppost and fell to the ground with blood coming out of his nose after he and his younger brother Isaac ran beside Salah’s car on Saturday while waving at the Liverpool player, Sky News reported. Having spotted the youngster in pain, Liverpool superstar Salah circled round to check on him before offering to pose for pictures.

“Mo was apologetic and caring and was really compassionate towards the boys and made them feel so much better,” Fowler’s stepfather Joe Cooper told Sky News. “@MoSalah thank you for coming back to check on my boys after Louis KO’d himself trying to get a wave,” Cooper added on Twitter with pictures.

“He loves you so much and the pain went away instantly when you came to give them a hug. A nose reset well worth it he said. You are a top man and a true gent.”