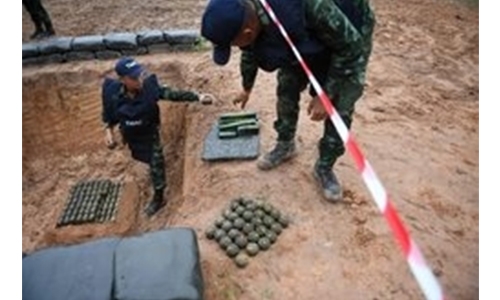 Pulling back to a safe distance atop a hill, Thai troops blew up thousands of anti-personnel landmines yesterday with controlled explosions that sent black plumes of smoke high above jungle treetops. Thailand is one of more than 160 countries to have signed the Ottawa Treaty, which prohibits the use and stockpiling of the destructive weapon and aims to clear all mines by 2025.

As part of a dayslong operation to destroy the rest of Thailand’s stockpile, soldiers clad in protective vests placed stacks of unexploded ordnance in a pit and gingerly laid explosive charges on top. “From now on, Thailand will no longer retain any more anti-personnel landmines,” said General Chaichana Nakkerd with the Thai armed forces joint chiefs of staff. Standing on an observation hill as technicians detonated the charges, he said 3,133 landmines would be destroyed in Sa Kaeo province to “affirm our stance in not using” them.

But the border between Thailand and Cambodia is still littered with landmines from decades of civil war in Cambodia, where the remnants of the defeated Khmer Rouge retreated in the 1980s.  Chaichana said Thailand, which signed the treaty in 1998, still has a long way to go to clear a 360-kilometre area along the border by its deadline of 2023. “The problem we still have is... the border with neighbouring countries are in rural areas and on hills,” he said, making them challenging to remove.

Local residents who had been maimed by leftover mines were given gifts by the army after watching the operation. The Ottawa treaty has helped eliminate 51 million landmines over the past two decades since it was enacted in 1997.  But the United States, China, Egypt, India, Israel, Pakistan and Russia have not signed it. A recent Landmine Monitor report shows that the number of people killed or injured from landmines nearly doubled in 2015 to 6,461 from 3,695 the year before -- making it the highest recorded total in a decade.

Trump freezes all Venezuelan govt assets in US