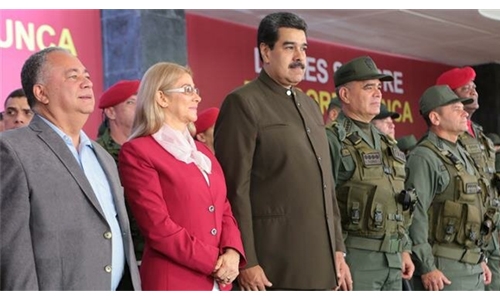 Trump freezes all Venezuelan govt assets in US

President Donald Trump on Monday ordered a freeze on all Venezuelan government assets in the United States and barred transactions with its authorities, in Washington’s latest move against President Nicolas Maduro. The announcement came a day ahead of a major conference in Lima on the Venezuelan crisis, where the US delegation is set to announce “sweeping steps” against the regime in Caracas.

Trump took the step “in light of the continued usurpation of power by Nicolas Maduro and persons affiliated with him, as well as human rights abuses,” according to the order. The Wall Street Journal said the move was the first against a Western Hemisphere government in over 30 years, and imposes restrictions on Caracas similar to those faced by North Korea, Iran, Syria and Cuba. Asked last week if he was considering a “blockade or quarantine” of Venezuela, Trump responded: “Yes, I am.”

In Lima, the high-powered US delegation, including Trump’s National Security Advisor John Bolton and commerce secretary Wilbur Ross, is expected to outline further punitive measures. Bolton described those steps as “sweeping... with a lot of potential consequences.” Trump’s asset freeze order affects “all property and interests in property of the Government of Venezuela that are in the United States, that hereafter come within the United States, or that are or hereafter come within the possession or control of any United States person.”

Venezuelan opposition leader Juan Guaido, who is recognized as interim president by the US and dozens of other countries, tweeted his approval of the move, saying it “seeks to protect Venezuelans” from Maduro’s “dictatorship.” “Those who support it, benefiting from the hunger and pain of Venezuelans, should know that it has consequences,” Guaido said.

Guaido earlier this year declared himself interim president in a bid to oust Maduro. But the socialist leader has refused to yield, and in the executive order Trump blamed Maduro’s government for “ongoing attempts to undermine” Guaido and the opposition-controlled National Assembly, which he leads. Guaido’s efforts have meanwhile stalled despite the international support and widespread discontent with Maduro, who has been able to cling to power with the backing of the country’s security forces.

The two sides began negotiating in Norway in May, with the most recent round of talks opening last week in Barbados. Both Guaido and Maduro have “reiterated their willingness” to resolve the political crisis, mediator Norway has said, but the talks have produced no resolution yet. The parties have in the past laid out starkly opposing positions, with Guaido and the opposition calling Maduro a “usurper” and accusing him of having rigged the 2018 poll that saw him re-elected. They want him to stand down so new elections can be held.

Maduro has refused to resign and says the negotiations must lead to “democratic coexistence” and an end to what he describes as an attempted “coup” orchestrated by the United States. Despite the loss of momentum, Guaido remains the greatest threat to Maduro, even though the National Assembly has been effectively rendered powerless by Caracas.