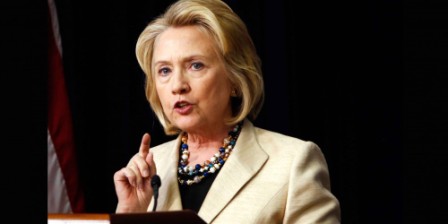 Hillary Rodham Clinton’s attorney has agreed to provide the FBI with the private server that housed her e-mail during her four years as secretary of state, Clinton’s presidential campaign said Tuesday.

Her attorney also has agreed to give agents a thumb drive containing copies of thousands of e-mails that Clinton had previously turned over to the State Department.

The FBI has been looking into the security of Clinton’s unusual private system, which has emerged as an issue in her campaign amid growing questions from Republicans and some U.S. intelligence officials about whether government secrets might have been put at risk.

The development in the FBI inquiry came the same day that a top intelligence official whose office has been reviewing some of Clinton’s e-mails informed congressional leaders that top-secret information had been contained in two e-mails that traveled across the server.

The finding, contained in a letter sent to leaders of key oversight committees, marked the first indication from government officials that information regarded as top secret — the government’s highest category of security designation — may have passed across Clinton’s server while she led the State Department.

A State Department spokesman late Tuesday described the top-secret designation as a recommendation and said they had not been marked classified at the time, but said staffers “circulated these e-mails on unclassified systems in 2009 and 2011 and ultimately some were forwarded to Secretary Clinton.”

Nick Merrill, a Clinton spokesman, said Tuesday night that Clinton is cooperating with the FBI probe. He declined to say whether the FBI ordered that she turn over the devices and when her attorney, David Kendall, had done so.

“She directed her team to give her e-mail server that was used during her tenure as secretary to the Department of Justice, as well as a thumb drive containing copies of her e-mails already provided to the State Department,” Merrill said. “She pledged to cooperate with the government’s security inquiry, and if there are more questions, we will continue to address them.

The inquiry by the FBI is considered preliminary and appears to be focused on ensuring the proper handling of classified material. Officials have said that Clinton, the Democratic presidential front-runner, is not a target.

Clinton has resisted relinquishing control of the server. In March, she said the server contained “personal communications from my husband and me.”

“I believe I have met all of my responsibilities, and the server will remain private,” she said then, in response to a question from a reporter about whether she would allow an independent party to examine the device

Clinton turned over more than 30,000 e-mails from the account to the State Department in December, and the agency is vetting those messages for release to the public. She has said that she deemed an additional 32,000 ­e-mails to be personal and chose not to keep them.

Kendall told a congressional oversight committee in a letter that there was “no basis” to support a third-party examination of the server. He indicated that he had confirmed with IT staffers that no e-mail sent or received by Clinton’s account while she was secretary of state remained on the server or backup systems associated with the system. “Thus, there are no hdr22@clintonemail.com emails from Secretary of State Clinton’s tenure on the server for any review, even if such a review were appropriate or legally authorized,” he wrote.

Meanwhile Tuesday, 17 House and Senate members from both parties were informed about the presence of “top secret” information on the Clinton e-mail system in a letter from the inspector general for the intelligence community, I. Charles McCullough III. The letter was first reported Tuesday by the McClatchy news service.