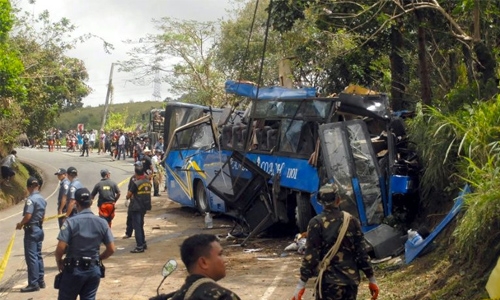 Manila : Thirteen Philippine college students on a camping holiday and a bus driver were killed and dozens injured on Monday when their bus slammed into an electricity post in a mountainous region, police said.

The bus, rented by a Manila private school, was taking over 50 teenage students and an instructor on the trip when the driver lost control on a downhill slope in the town of Tanay, said regional police spokesman Superintendent Chitadel Gaoiran.

The impact with the concrete post caved in the front of the bus and scattered parts of the engine on the roadside.

Ten students were killed on the spot while four other people including the bus driver died in hospital, officials said.

The bus's brakes appeared to have failed, said Boysie Mata, the police desk officer at Tanay in Rizal province east of Manila.

Almost 40 others were injured, said Bong Bati, the civil defence officer at Tanay.

"There were some victims who are seriously injured that need to be transferred to a bigger hospital," he added.