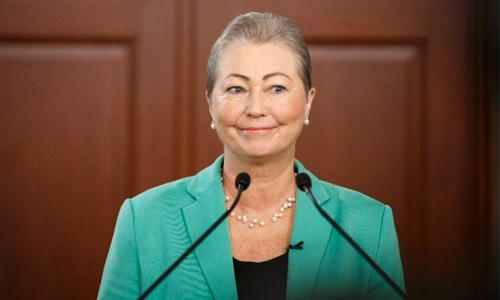 Oslo : Kaci Kullmann Five, the chairwoman of the Norwegian Nobel Committee which selects the Peace Prize laureates, has died aged 65 after a long illness, the organisation said on Monday.

Kullmann was diagnosed with breast cancer in 2014 and underwent treatment. But her condition worsened, and she was forced to cancel several appearances last year.

"She was a role model for many young women," Norway's Conservative Prime Minister Erna Solberg wrote on Facebook.

Kullmann became a member of the Norwegian Nobel committee in 2003, and was elected chair in 2015.

The former businesswoman served as trade and shipping minister between 1989-1990 and was the leader of the Conservative Party between 1991-1994.

"We have lost a strong and warm person and one of the most prominent and pioneering former leaders of (the Conservative Party)," Solberg wrote.

"My thoughts are with Kaci's family. Many of us ... are thinking of them," she added.

The daughter of a Norwegian dentist, Kullmann was born in an Oslo suburb on April 13, 1951.

Kullmann was married to Carsten O. Five, a former finance magazine editor, and had two children. She died on Sunday.

iGA to research on foreign investments