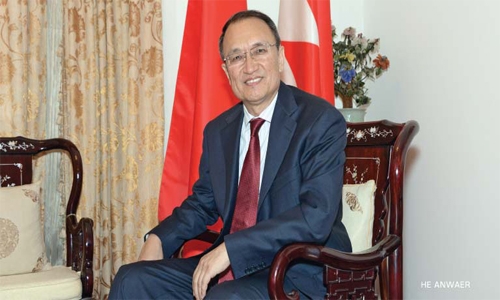 In the evening of 4 December 2020, Mr Michael Pompeo, US Secretary of State virtually participated the 16th IISS Manama Dialogue which is hosted by the International Institute for Strategic Studies, and made remarks on the opening address. Mr Pompeo viciously attacked the Communist Party of China (CPC) in his speech, slandered Chinese high-technology enterprises, and accused China spreading the COVID-19 virus. Out of ideological prejudice and political self-interest, Mr Pompeo has repeatedly slandered and smeared China, exaggerated the so-called China threat, and fabricated and spread political lies and political viruses against China. On behalf of the Chinese Embassy in Bahrain, I resolutely opposed, strongly dissatisfied and severely condemned to Mr Pompeo’s relevant remarks on China.

Firstly, Mr Pompeo has been always viciously attacking the CPC, hype up ideological confrontation based on a groundless lie. The international community won’t be fooled by Mr. Pompeo’s words. China has been upholding peace, development, cooperation and mutual benefit, sticking to the diplomatic principle of safeguarding world peace and promoting common development, proactively participating in international and regional affairs, and making major contributions to world development.

People can tell right from wrong. Mr Pompeo should face up to and heed the rational, impartial calls from the international community, view objectively China’s achievements and contributions under the CPC leadership, and stay away from the narrow-minded anti-China approach which will only make them stand against the world and the trend of the times.

Secondly, without any solid evidence, the US has launched a global campaign against a private Chinese company. Everyone can see easily and clearly that the US goal is to keep its monopoly in science and technology but deny other countries the legitimate right to development. It doesn’t even bother to disguise its bullying. This not only violates the international rules of fair trade, but also hurts the free global market environment. The US conducts wire-tapping and mass surveillance around the globe, and these wrongful acts are already an open secret. The US is not qualified to build a coalition of “clean countries”. Distortion, defamation or politically suppression of companies who are front-runners in 5G technology are despicable actions and, instead of gaining advantage or winning respect.

China recently put forward the Global Initiative on Data Security and called on ICT companies to not install backdoors in their products and services. Should the need arise to obtain overseas data out of law enforcement purposes such as combating crimes, countries should do it through judicial assistance or other relevant multilateral and bilateral agreements. China calls on all countries to support the Global Initiative on Data Security, jointly formulate global rules on data security, and together safeguard cybersecurity.

Thirdly, the report once again vindicates the fact that tracing the origin of the virus is a complex scientific issue, and it is up to scientists around the world to conduct international scientific research and cooperation. WHO officials have said virus tracing is an ongoing process that may involve multiple countries and localities. As this process evolves, we should be open to the possibility of various origins. China continues supporting scientists around the world in conducting global scientific research on the source and route of transmission of the virus. China also supports WHO-led cooperation among member states on the zoonotic source of COVID-19 and in other fields.

Since COVID-19 broke out, China has been working in an open, transparent and responsible manner to fulfil the IHR obligations and participate in international anti-epidemic cooperation. At the earliest possible time, China reported to WHO on the epidemic, identified and published the genome sequence of the virus, made public our diagnosis, treatment and containment measures, and shared the epidemic information and containment experience with the relevant countries and regions. In the face of the pandemic situation, China has provided assistance to more than 150 countries and regions, joined COVAX, and actively supported WHO’s crucial role in fighting the pandemic. The Chinese government puts people and life first, engages in cooperation, and the results we achieved can withstand the test of time and history.

How about certain US politicians? They’ve got all the resources they need. Still, they wasted the precious window of opportunity. The United States withdrew from WHO and voted against the COV- ID-19 resolution in the UN General Assembly. It chose to stand on the opposite side of 169 countries by openly flouting international cooperation against the pandemic.

China has given a thorough account of its epidemic response with solid facts and a clear timeline. They try to blame China for their poor epidemic response and to discredit China in the service of their political gains. The American people and international community bear witness to their incompetence. They should understand that respecting facts and science is the only way to save American lives and defeat the virus.

(Chinese Ambassador to Bahrain Dr Anwar Yusuf Abdulla Alabdulla issues a solemn statement on the remarks by US Secretary of State Mike Pompeo attacking China on the Opening Address of 2020 IISS Manama Dialogue.)