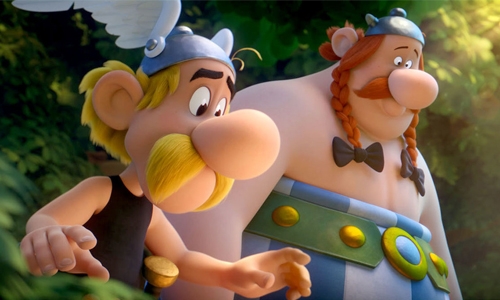 Asterix: The Secret of the Magic Potion (French: Astérix: Le Secret de la Potion Magique) is a French computer-animated adventure family comedy film co-directed by Alexandre Astier and Louis Clichy. The screenplay by Astier is based on the Asterix comic book characters created by Goscinny and Uderzo.

The druid Getafix (Thomas Rau) is out collecting mistletoe one day, when he falls from a great height, breaking his foot. Now reliant on Obelisk (C. Ernst Harth) to transport him about, Getafix realises he needs to find an apprentice druid to replace him when he’s no longer able to perform his duties. Getafix is the only person in the Gallic village who knows the secret magic potion that gives the villagers the strength and height to fight off the Roman invaders.

He sets off therefore, with Asterix (Christian Clavier), Obelisk and a young, feisty girl Pectine (Barbara Bandeira) in search of a young replacement. Getafix consults the grand council of druids who give him a list of prospective candidates. Getafix and his company travel great distances interviewing each of them. Meanwhile, an evil druid called Demonix (Daniel Mesguich) is plotting to steal the recipe for the potion and trade it to the Romans in return for ownership of the Gallic village and much more.

Demonix finds the young Teleferix (Alex Lutz), a potential druid, before Getafix does and tries to convince him to help him. Teleferix is somewhat persuaded but a battle ensues between the Gauls, the Romans and Demonix, and Teleferix is needed to make the magic potion, which he does, just in time to save the Gauls.

Asterix: The Secret of the Magic Potion is set in ancient times and much of the humour may go over children’s heads. However, older children and teens will probably enjoy it. Due to the high level of violence, it isn’t recommended for children under 8. The main message from this movie is that good wins over evil.