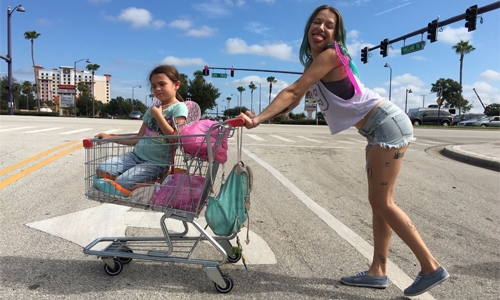 The Florida Project is an American slice of life drama film directed by Sean Baker and written by Baker and Chris Bergoch. It stars Willem Dafoe, Brooklynn Prince, Bria Vinaite, Valeria Cotto, Christopher Rivera, and Caleb Landry Jones. It was the first film appearance for many of the cast.

The plot follows a six-year-old girl living with her rebellious and irresponsible mother in a motel in Kissimmee, Florida, as they try to stay out of trouble and make ends meet, so they may keep ahead of impending homelessness. The misery and squalor of their life in Kissimee is contrasted with nearby Walt Disney World, which can be seen at a distance in one shot. The Florida Project is both their effort to stay fed and safe (a project), and was the original name of the theme park.

The Florida Project received critical acclaim upon release, with most of the praise going to the direction and the performances of Prince and Dafoe. On review aggregation website Rotten Tomatoes, The Florida Project has an approval rating of 96% based on 260 reviews, with a weighted average of 8.8/10.

The website’s critical consensus reads, “The Florida Project offers a colorfully empathetic look at an underrepresented part of the population that proves absorbing even as it raises sobering questions about modern America.” On Metacritic, the film holds a weighted average score of 92 out of 100, based on 44 critics, indicating “universal acclaim”. Ann Hornaday of The Washington Post wrote that “Dafoe delivers his finest performance in recent memory, bringing to levelheaded, unsanctimonious life a character who offers a glimmer of hope and caring within a world markedly short on both.”

Richard Roeper of the Chicago Sun-Times wrote, “It’s film that’ll make you wince at times, and you’ll most likely not want to see twice, but seeing it once is an experience you’ll not soon forget.” However, Cassie da Costa of Film Comment criticized the film, writing, “Baker crudely renders his marginalized subjects because while he can imagine their daily realities he cannot fathom their inner lives.”