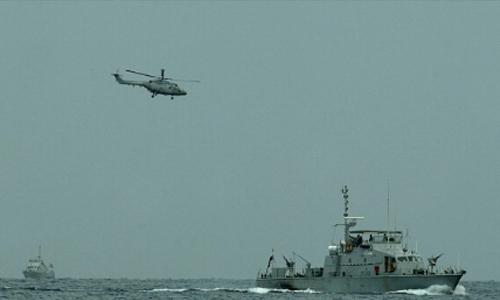 An important conference on Red Sea security was convened in Washington last month. Over two days (April 15 and 16), scores of participants from some 20 countries and organizations discussed the security threats facing the two shores of this waterway, as well as the risks to international navigation. Political, defence and security officials and experts debated the responses and opportunities for cooperation to reverse recent gains by bad regional and transnational actors in the region. More than 10 perc ent of world trade crosses the Red Sea, which stretches between two important narrow passages and possible chokepoints for freedom of navigation: The Bab Al-Mandab Strait and the Suez Canal.

About 300 million people live on its shores and have been trading for millennia, but they now face major challenges both regionally and internationally. Threats facing the Red Security zone include terrorism, piracy, human trafficking, drugs, arms smuggling and other illicit human trade. New and emerging threats include cyberattacks and the smuggling of missiles, drones and improvised explosive devices (IEDs). And they are all connected; for example, pirates and former pirates provide protection for illegal fishing boats, and some now cooperate with Daesh and other terror groups. With war in Syria raging, drugs from Afghanistan now go to Europe through East Africa, and terrorists are funded by the drug trade.

The lucrative but illicit trade in charcoal from Somalia funds Al-Shabab terror group. Iran exploits the instability in the region to smuggle weapons to the Houthis, threaten freedom of navigation in Bab Al-Mandab, sell fuel and get around sanctions. Iranian boats are also the main beneficiaries of illegal fishing in Somali waters. Human traffickers smuggle children and teenagers to Europe, paying local warlords and terrorists to facilitate their trade. Interactions and possibilities for collaboration between organized crime, terrorists and rogue states are infinite. And they are getting more sophisticated. In addition to cyber threats, newer guided missiles and drone boats, they use tide timings to get local fishermen to help in their activities.

The threats are magnified by the fact that there are many ungoverned spaces along the Red Sea and Gulf of Aden, in Yemen and Somalia, and security forces on the west coast have limited capacity. Other than Djibouti and Egypt, there is no coastal policing to speak of. Poverty and weak governance in some Red Sea countries also enable this network of transnational illegal activity, making the Horn of Africa in particular a hub for international organized crime and terrorists. The US presence at the Red Sea conference was the most organized and vocal.

Officials from the Departments of State and Defence were there, as well as representatives from several organizations, including the US Institute of Peace, the Near East and South Asia Centre for Strategic Studies, the Africa Centre for Strategic Studies, and other nongovernmental organizations and research groups. They presented the most detailed accounts on the threats facing the Red Sea zone. The Gulf Cooperation Council, African Union and others provided suggestions for cooperation to reverse the recent gains by illicit actors. There was wide consensus on the need to cooperate more closely to face the conventional and emerging threats in the Red Sea.

It was agreed that a trilateral cooperative approach provides the best way forward. Cooperation between countries and regional organizations on both sides of the Red Sea is essential, and without which very little can be achieved. However, the responsibility for freedom of navigation in the Red Sea is global. Major trading nations, such as China, Japan, the US and European nations, as well as the UN and other relevant international organizations, should share the burden of safeguarding international waters. Participants agreed to meet again in the near future in Mombasa, Kenya, to fine tune the various proposals for useful cooperation and the division of labour between these three components.

Among the suggestions that were discussed and will be the subject of closer scrutiny in future meetings are the following. Defence cooperation, joint exercises, and training and capacity-building efforts should continue and intensify, in addition to developing effective methods to counter new threats such as cyberattacks, missile and drone proliferation, drones, and IEDs and booby-trapped boats. A more holistic approach to countering terrorism should be more effective. It would include political consultations (on designating groups and individuals), operational cooperation and information sharing between security forces, disrupting terrorist funding, and degrading terrorist groups’ ability to recruit and radicalize young people.

However, most countries along the Red Sea and Gulf of Aden are either poor, unstable or both. They have limited economic means and technical capacity to exercise their authority over their territorial waters. As such, military cooperation and counterterrorism will have limited value if they are not accompanied by addressing the underlying causes of instability, underdevelopment and poverty in the region. Promoting trade between the Red Sea’s two shores is an important first step. Although about a 10th of world trade, including 4 million barrels of oil, passes through the Red Sea daily, relatively limited trade takes place between the countries overlooking the Red Sea and Gulf of Aden. For millennia, the two sides traded briskly, but in modern times that trade has atrophied.

Only investment can create jobs and provide the youth with viable alternatives to illegal activities, but promoting investment faces formidable governance challenges, which need to be addressed candidly and robustly. International donors give generously, but there is very little coordination between them to focus aid on addressing technical capacity limitations and governance. Development aid can help local communities to build a more hospitable investment climate.

Better coordination between humanitarian aid providers is needed to target the most vulnerable communities and deprive terrorists of the ability to control aid or direct it to serve their objectives. These and other proposals will be on the table when the next Red Sea security dialogue takes place in Mombasa in the near future.

Palestinians can use Trump’s peace plan as a launchpad