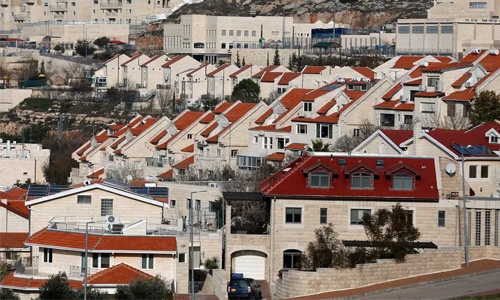 Palestinians can use Trump’s peace plan as a launchpad

Sometime after Ramadan, US President Donald Trump will unveil his “deal of the century” plan for Israeli-Palestinian peace. It is clear from the rhetoric from Trump’s advisers that the plan will pander to Israel’s most extremist desires while further marginalizing Palestinian rights. But have Palestinians marginalized themselves through their rejectionism, handing Israel a clear path to pursue its one-sided objectives with little or no resistance? Through rejectionism, the Palestinians have allowed themselves to be boxed-in, giving extremist voices the power to bully and silence pro-compromise moderates into non-engagement.

Should Palestinians continue to play the rejectionism card, with no voice to affect change? Alternatively, they can engage the process and have a voice — a voice that can expose Israel’s anti-peace policies. Engaging in the peace process, even one as flawed as this, is a powerful strategy that would allow Palestinians to more forcefully and effectively challenge Israel’s racist policies. It would also allow Palestinians to proactively assert a reasoned alternative peace plan that can attract widespread support, including from the American Jews who are disenchanted with Israel’s extremist government policies.

The worst thing Palestinians can do is snub Trump’s peace plan, as flawed as it might be, without engaging in the process. First, Palestinians need to stop coddling extremists and enforce a policy of one-government rule. Palestine cannot exist as two separate political entities, one in the West Bank, where the majority of Palestinians live under occupation, and another in the Gaza Strip. There is no place for Hamas or the Muslim Brotherhood in the future of Palestine. Religion and politics should not be mixed; when they are, it results in calamity.

The Palestinian Authority must assert itself as the true and only voice of Palestinians. But, more importantly, Palestinians also need to redefine their vision of a future peace. Instead of starting the negotiations from compromise, based on the two-state solution, they should start from their ultimate objective. Their broad peace narrative should call for the creation of one state, in which Christians, Muslims and Jews live as equals. Palestinians need to define their own vision and assert it at every opportunity, rather than be defined by Israel, which has rejected the one-state solution, the two-state solution and the creation of an independent Palestinian state.

Rejecting Trump’s peace plan out of hand gives Israel a “license to kill.” Israel’s rightwing leadership understands that it can impact the Palestinians simply by making extremist declarations. This rhetoric becomes a weapon that undermines Palestinian rights. Every time Palestinians turn away from the peace process or a difficult discussion, they surrender rights and empower Israel to do what it wants. That needs to stop. Palestinians need something more; something new to add to the negotiations. They need to push back and call Israel’s bluff. By calling for a single state as their starting point, they are advocating equal rights for all in both the Occupied Territories and in Israel.

How do they empower that proposal? By demanding that Israel’s illegal settlements — the foundation of its vision for apartheid — be opened up to Palestinians. They should demand that every illegal Israeli settlement be “legalized” by embracing a democratization process that would allow non-Jews to move in and eventually achieve population parity. This proposal borrows from the strategy used by African-Americans who fought segregationist racism in America. They demanded equality not by creating separate municipalities for black people only, but by demanding equality through integration. It was a difficult and drawn-out process, but it succeeded.

A Palestinian civil rights movement can succeed in Israel too. The plan to integrate Israeli settlements would redefine peace and give Palestinians leverage. Palestinians need to ignore the rejectionists and Hamas, the religious extremists who have undermined the majority. They must push for the creation of a secular state in which all people are equal. Religious political parties need to be banned. Extremists are louder, more aggressive and often use violence to block the peace process. Moderates must step up their own activism and confront the rejectionists.

The Palestinian people deserve peace and justice; they repudiate violence and have embraced democracy. Moderates need to become louder and stronger, and take control. Rejectionism has empowered Israel and fuelled an erosion of Palestinian rights, not just in Israel but in the Occupied Territories too. It has allowed Israel’s right-wing governments to achieve many of the discriminatory policies and practices that exist today purely through persistence and the absence of effective Palestinian push-back.

Trump’s peace plan may be incompatible with the goals of peace and justice, but it can be exploited as a starting place for moderate Palestinian voices, in collaboration with the moderate voices in America — including many American Jews — Europe and Israel that reject Tel Aviv’s growing extremism.