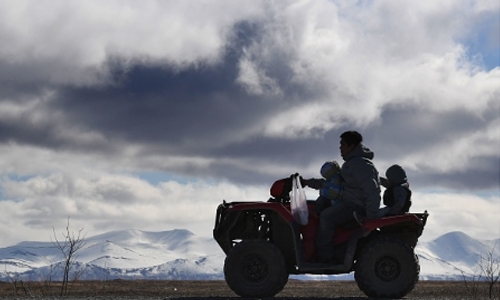 Head in the clouds on climate change

On April 17, the aircraft-tracking website FlightRadar.com logged more than 200,000 flights. As many as 18,000 aircraft were in the air at any one time. Assuming a conservative average of 200 passengers per flight, in one 24-hour period 40 million people — the population of Iraq — were temporarily absent from the surface of the Earth. The statistic is as significant as it is mind-boggling. In previous years that number of flights had not been achieved until the northern hemisphere’s summer, when half the world goes on vacation.

What it and every other statistic related to the airline business shows is that even as the world is struggling to deal with climate change, fossil-fueled air travel is expanding at a rate that renders efforts to limit the damage largely futile. Air travel currently accounts for “only” 3 percent of greenhouse emissions, but this is up almost 90 percent since 1990 and rising fast. Boarding an aircraft is environmentally disastrous. Take a flight from Dubai to New York and back and your share of the carbon dioxide generated is 3.26 tons — more than the cost of air-conditioning your home for a year.

Increasingly, we are prepared to recycle our rubbish, reject plastic bags and consider whether our next car really ought to be a hybrid. But when it comes to air travel, we have a blind spot. The contradiction was illustrated during the Extinction Rebellion climate-change protests in London last month, when the actress Emma Thompson, who had flown in from the US to offer support, was accused of hypocrisy. “Unfortunately, sometimes I have to fly,” she said, “but ... I plant a lot of trees.” It was, she added, wrong to blame individuals: “Everyone has been asking for clean energy for decades.”

In fact, what we have been asking for is cheaper air travel, which the industry has gladly supplied. Because none of us is prepared to protest by sacrificing our “right” to flight, the industry is content to pay only lip service to green innovation, while the Emma Thompsons of the world assuage their consciences by planting a few trees and air travel continues to grow alarmingly. In 1974, 420 million people flew. In 2017, global passenger numbers, up 7.3 percent in a year, exceeded 4 billion for the first time. Flying “has never been more accessible,” crowed the industry trade body, the International Air Transport Association (IATA), as it released the figures in September.

The aviation industry, it seems, is no less in denial than its customers. The International Civil Aviation Organization (ICAO), a UN agency, says its strategic objectives “are strongly linked” to 15 of the UN’s 17 Sustainable Development Goals. Toughest to reconcile with the industry’s obvious impact on climate change is the assertion that the ICAO is promoting “inclusive and sustainable economic growth” and taking “urgent action to combat climate change.” In part, the problem lies with the concept of “sustainable development.”

The UN’s twin goals — raising the underdeveloped world out of poverty while fighting climate change — are simply incompatible. So far, less than 20 percent of the world’s population has flown. But as the increasingly affluent populations of developing nations catch up and reach for the skies, that is set to change. In 2017, every region saw impressive passenger growth. The Middle East, with a 5.3 percent share of the global market (216.1 million passengers, up 4.6 percent in a year) was at No. 5 in IATA’s regional rankings. But the Middle East’s impressive expansion is nothing compared with that of the Asia Pacific region, which has the largest share of global passengers (36.3 percent).

The 1.5 billion who flew in 2017 represented an increase of 10.6 percent in one year, with millions more joining them. IATA insists that the aviation industry “recognizes the need to address its impacts at the local and global levels (and) has adopted a set of ambitious targets to mitigate (carbon dioxide) emissions.” Unfortunately, even if they were achievable, those ambitions appear hopelessly inadequate in the face of the runaway growth in air travel. What IATA and its members are not prepared to contemplate are green taxes.

While the goal of such taxes was “laudable,” it said last year, the “distortionary effect on jobs and the economy ... makes it an ineffective policy choice.” Effective taxes would mean higher ticket prices, which would reduce the number of people able to fly. Yes, this would hit the poorest hardest. But as air travel becomes ever cheaper, the true costs are being borne by us all. Remember Bertrand Picard and the Abu Dhabi-backed Solar Impulse 2? Yes, it was “a first in the history of aviation.”

But if the painful, 23-day circumnavigation of the globe in 2016 proved anything, it was that commercial solar flight remains a whimsical dream for which the planet cannot afford to wait. That leaves only one solution — to halt and reverse the escalation in air travel, an unpopular step that would demand a major rethink in the way the world works, and in the sense of entitlement that has led many of us to regard the luxury of air travel as a human right.

Air travel is not the greatest single threat to the environment, but with thousands of aircraft writing their warning messages across the skies every hour of every day, it is the most obvious. As such, air travel is symbolic of the inability of the human race to set aside self-interest for the greater good, get its head out of the clouds and save itself from itself

Russia can deal with everyone in the Middle East