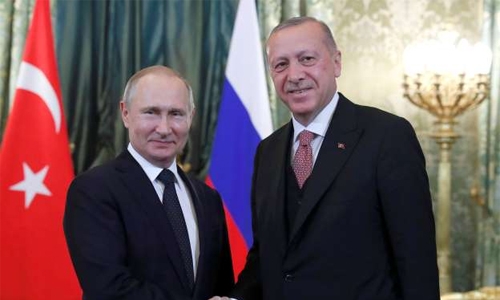 Russia can deal with everyone in the Middle East

In the rumbling row over Turkey’s purchase of a Russia-made missile system, Ankara has been given an ultimatum to choose between the United States and Russia. But that ultimatum did not come from Moscow. In fact, the anti-aircraft squabble is a rare example of an ally of Russia being forced to choose sides. These days, Russia appears to prefer a new strategy of allowing its allies to maintain multiple allegiances, and remaining a friend to no one.

It was the US vice president Mike Pence who recently warned Turkey that it must choose between relations with the US or Russia. Turkey has finalised the purchase of the S-400, which the US believes would be a threat to its own advanced F-35 fighter jets. Turkey also uses the jets, but the US has threatened to expel Turkey from the programme if the S-400 purchase goes ahead. Russia, by contrast, has not said much, except to suggest that the purchase of the S-400 is a done deal. Instead, Moscow has been more focused on being a power broker.

In the past week, it has mediated on Syria with Turkey and Iran in Kazakhstan, as well as brokering a deal that released two Syrian prisoners from Israeli custody, in return for the remains of an Israeli soldier killed during the 1982 invasion of Lebanon. That negotiated swap – instigated by Russia and carried out with a certain level of public ceremony – did not stop Russia from also adding its name to a statement decrying Israel’s annexation of the Golan Heights. This projected even-handedness is meant to suggest a Russia that can negotiate deals, even between enemies, without taking sides. Even its alliance with Syria does not give Damascus carte blanche.

In the run-up to the latest Astana conference, Bashar Al Assad was pushing for greater action on the province of Idlib; the regime has been shelling the area and now wants to retake it. But, just this weekend, Vladimir Putin, on a trip to China, ruled that out, saying, pointedly, that Moscow “and our Syrian friends” believed that the timing was wrong. The same applies to Iran. The Islamic Revolutionary Guard Corps and pro-Iranian militias operate in Syria, and work closely with Russia, but Russia has also switched off its air-defence systems around Syria to allow Israeli jets to target Iranian assets there.

When Saudi Arabia’s King Salman went to Moscow in 2017, it was the first time a Saudi monarch had visited the country. A few months earlier, Iran’s Hassan Rouhani had his own official visit to Russia. Since then, Russia has sought defence deals with both regional rivals. In all these cases, neither the other relationships those countries have, nor Russia’s own ties have proven a hindrance. Russia is as keen to deal with Israel, which moves in lockstep with Washington, as it is with Syria, which has not had good ties with the US for decades.

This “faithless friend” strategy is intriguing and contrasts with the historic desire of the United States to be seen as a stable partner. Part of the reason for behaving this way is a lack of choice. Most of the countries that Russia deals with are pro-American and intend to stay that way. In the case of bigger countries, such as Turkey and Egypt, Moscow simply can’t offer enough to draw them out of Washington’s orbit. Doing piecemeal deals offers at least some leverage. For some countries, accepting Moscow’s overtures can be a way of signalling independence.

Take Turkey’s purchase of the S-400. The original belief was that Turkey, a member of Nato almost since the organisation’s founding, was merely flirting with Moscow in order to get the US to offer its own Patriot missile defence system. That may well still happen, although when the US did finally offer Patriots at the end of last year, President Recep Tayyip Erdogan turned them down. A further reason is that small deals and shifting alliances don’t invite retaliation. During the S-400 row, the White House threatened Turkey with sanctions under a little-known law brought in two years ago.

The Countering America’s Adversaries through Sanctions Act allows the US to sanction countries that trade with the Russian military sector. So far, it has not been used against any allies, but a big deal could provoke the US. There is also a power vacuum to consider. Under the Trump presidency, the US appears unsure of what it wants in the region, pulling troops out of Syria and signalling a reluctance to get involved in foreign affairs. The other two western countries that have traditionally played a role in the region are either preoccupied with internal affairs, such as the UK, or unable to project sufficient military force to replace the US, as is the case with France.

With so much changing in the region and so rapidly, the strongest position is not to pick a side. Moscow has played this game cleverly, adopting a pragmatic approach, privileging military sales and diplomatic relations over enduring relationships, doing deals but also publicly distancing itself from close associations. This way, Russia is free to pursue its own interests, while remaining on relatively good terms with everyone. In a Middle East of shifting alliances, there is a great deal of benefit to being an unstable partner.

Head in the clouds on climate change