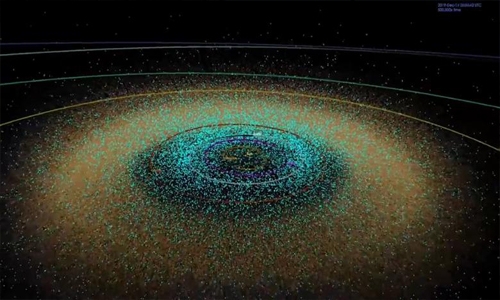 The largest asteroid that has been predicted to make a close approach to Earth this year will zip by from a safe distance on Sunday, according to NASA.

Scientists estimate the asteroid is between 1,300 and 2,230 feet wide.
The near-Earth asteroid, known as 2001 FO32, will be 1.25 million miles, or more than five times the distance between Earth and the moon, during its closest approach.
It will also be moving much faster than most asteroids that fly by our planet, rocketing along at 77,000 miles per hour.
The asteroid's closest approach will occur at 12:03 p.m. ET Sunday.
"There is no threat of a collision with our planet now or for centuries to come," according to a release from NASA.
"We know the orbital path of 2001 FO32 around the Sun very accurately since it was discovered 20 years ago and has been tracked ever since," said Paul Chodas, director of the Center for Near-Earth Object Studies, in a statement. "There is no chance the asteroid will get any closer to Earth than 1.25 million miles."
The centre is managed by NASA's Jet Propulsion Laboratory in Pasadena, California.
Although 2001 FO32 won't come close enough to cause any danger, it's still considered to be a potentially hazardous asteroid given its proximity. The Center for Near Earth Object Studies tracks and predicts orbits for such objects, using telescopes and radar to determine whether they have a chance of impacting Earth.
This asteroid is moving faster than others because of its angled and elongated orbit around the sun. This orbit takes the asteroid closer to the sun than Mercury, the closest planet to the star in our solar system, and twice as far as Mars, the fourth planet from the sun.
When 2001 FO32 nears the inner solar system, it picks up speed. Once it gets kicked back into deep space, it will slow down. It takes the asteroid 810 days to complete one orbit, but its next closest pass by Earth won't happen again until 2052.
The Virtual Telescope Project is providing live coverage from Rome.
If you have a telescope, you may be able to see the asteroid pass by, depending on where you live.
"The asteroid will be brightest while it moves through southern skies," Chodas said. "Amateur astronomers in the Southern Hemisphere and at low northern latitudes should be able to see this asteroid using moderate size telescopes with apertures of at least 8 inches in the nights leading up to closest approach, but they will probably need star charts to find it."

A close pass is a great chance for scientists to observe this leftover from the formation of the solar system. During the flyby, they can refine details of the asteroid's size and composition. The agency's Infrared Telescope Facility on Hawaii's Mauna Kea volcano is one of the telescopes that will be used to observe the asteroid.
"We're trying to do geology with a telescope," said Vishnu Reddy, associate professor at the University of Arizona's Lunar and Planetary Laboratory in Tucson, in a statement. "We're going to use the (telescope) to get the infrared spectrum to see its chemical makeup. Once we know that, we can make comparisons with meteorites on Earth to find out what minerals 2001 FO32 contains."
Learning the composition of the asteroid would reveal more about its history.
Three ground radio dishes in California, Australia and Spain, which comprise the Deep Space Network, can be used to essentially bounce radio signals off the asteroid. These can provide radar observations, such as whether the asteroid has its own moon.
"Observations dating back 20 years revealed that about 15% of near-Earth asteroids comparable in size to 2001 FO32 have a small moon," said Lance Benner, principal scientist at JPL, in a statement. "Currently little is known about this object, so the very close encounter provides an outstanding opportunity to learn a great deal about this asteroid."

Inmate charged with assaulting another