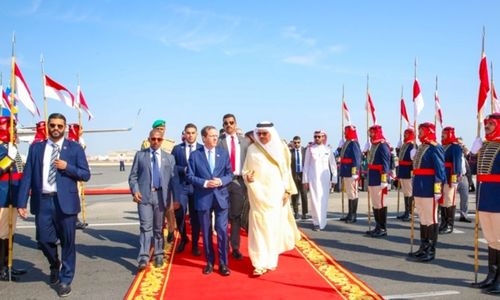 The President of the State of Israel, Isaac Herzog, and his accompanying delegation arrived here today, on an official visit to the Kingdom of Bahrain

During the visit, His Majesty King Hamad bin Isa Al Khalifa will hold talks with President Herzog on strengthening bilateral cooperation, as well as regional and international issues of mutual interest.

Upon his arrival at the Bahrain International Airport, the Israeli President was welcomed by the Minister of Foreign Affairs and Head of the Mission of Honour, Dr. Abdullatif bin Rashid Al-Zayani, the Governor of Muharraq Governorate, Salman bin Isa bin Hindi Al-Mannai, the Ambassador of the Kingdom of Bahrain to the State of Israel, Khalid bin Yusuf Al-Jalahma and the Ambassador of the State of Israel to the Kingdom of Bahrain, Eitan Naeh, and a number of senior officials.