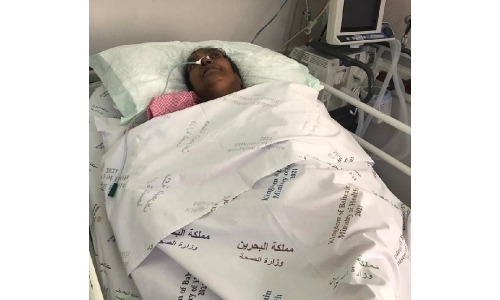 A group of social workers are in their best efforts to support a housemaid who suffered a stroke and is presently undergoing treatment at Salmaniya Medical Complex (SMC). Indian national Selvanayaki Velu Perumal, 55, was admitted to SMC on July 12, 2022, after suffering hypertension and stroke, according to social workers.

Speaking to The Daily Tribune, Senthilkumar GK, a social worker associated with Annai Tamil Mandram, said they have been in their best efforts to send Selvanayaki for more advanced treatment in India.

“She needs to return to India as soon as possible for further treatment. Since she is a stretcher-ridden patient, private airlines in Bahrain are charging around BD2,500,” he said. “At the moment, her son Shankar, who works as a labourer in Bahrain, is caring for her, and members of Annai Tamil Mandram visit her in the hospital on a daily basis, offering required support.”

According to the doctors, Selvanayaki’s medical condition could be cured if the right treatment is given at the right time, and her family in India is eagerly awaiting her arrival for further treatment.

“Also, we have informed her relatives that we, Annai Tamil Mandram, will handle all legal procedures and other formalities in the Kingdom until her trip to India,” he added. Speaking to The Daily Tribune, Alagudurai, brother of Selvanayaki said, “My sister has been living in Bahrain since 2012 and I was shocked to learn that she was admitted to SMC two months ago after fainting owing to high blood pressure.

The doctors who examined her recommended that they have done their best and she is recovering slowly. “She requires daily physiotherapy, which can be done at home, which is why we are attempting to bring her back to her hometown.”

“When I enquired with the airlines, they told me that it would cost a huge amount of money for my sister to board a flight as she needs a stretcher support. We are all poor labourers and are not in a position to afford it,” he lamented.

“We are also requesting assistance from the Indian Embassy in the Kingdom to facilitate the return of my sister home.” Those who would like to know more on the situation, give a ring on 00973-33678877.