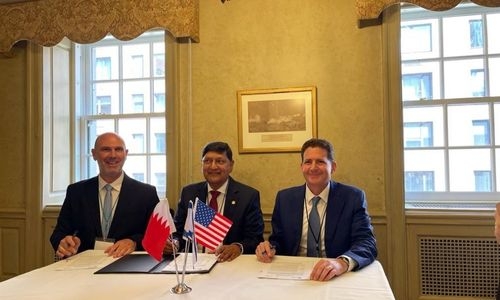 Sheba Medical Centre, one of the largest hospital facilities in the world and ranked as a World's Best Top 10 Hospital by Newsweek magazine, announced yesterday that it has signed its first-ever medical innovation agreement with Bahrain's King Hamad American Mission Hospital in Manama.

This historic agreement was announced at the C3 US-Arab Healthcare & Business Summit in New York City and comes on the second anniversary of the Abraham Accords, which were signed by the State of Israel, the United Arab Emirates and Bahrain.

"By signing this agreement, we are demonstrating our strengthening relationship with Bahrain and its health sector. Dr. George Cheriyan, is the leader of this amazing new hospital and we look forward to working with American Mission to show how Sheba and Israel can use healthcare as a pathway to flourish and succeed in the region," said Yoel Har-Even, Director of Sheba Global, the international business division at Sheba Medical Center.

"Our growing relationship with King Hamad American Mission Hospital symbolizes how we are looking to promote innovation as a tool for economic growth and prosperity between our two countries. Innovation is a bridge to foment economic growth and sustainability in order to provide better healthcare to everyone in the region," added Prof. Eyal Zimlichman, Chief Transformation & Innovation Officer at Sheba Medical Center, and founder of the ARC ecosystem.

Dr George Cheriyan, CEO of King Hamad American Mission Hospital of maintained, "Healthcare unites us in a common goal to bridge social, political and religious divides to create an equitable future for all in accessing high-quality healthcare.”