Qatar yet to respond to Bahrain's calls but doors are still open, says Foreign Minister | THE DAILY TRIBUNE | KINGDOM OF BAHRAIN 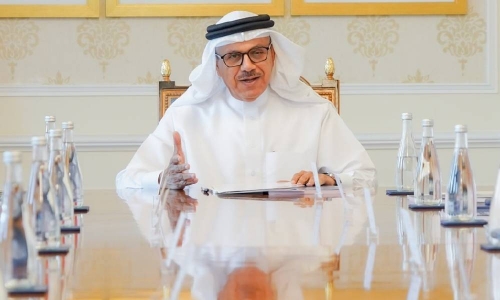 Qatar yet to respond to Bahrain's calls but doors are still open, says Foreign Minister

Bahrain's Foreign Minister yesterday expressed the keenness of Bahrain on continuing its brotherly ties with Qatar, saying that the "doors are still open for dialogue."

However, "the State of Qatar has not responded to the calls made by Bahrain so far," said the Minister of Foreign Affairs. Bahrain took the initiative following the decision made at Al Ula, the minister said, adding that Kingdom wants stability, growth and prosperity to prevail in the region.

"It's not right to leave pending matters without taking action," the minister said. "Therefore, the responsibility rests with the brothers in Qatar who failed to acknowledge the invitations addressed to them by the Kingdom," the minister said, stressing the need for talks on matters including Bahraini fishermen, maritime coordination, aviation and others.

"We still hope Qatar will respond to Kingdom's call to settle contentious issues through dialogue and direct negotiations," the minister said. The minister also appreciated the response of Qatar to Bahrain's decision to allow entry to all GCC citizens using ID cards or passports without any prior arrangements.

The minister was speaking during a meeting with editors of local newspapers. On GCC security, the minister, citing the directive of HM King Hamad bin Isa Al Khalifa and HRH Prince Salman bin Hamad Al Khalifa, the Crown Prince and Prime Minister, said it is a great challenge that requires close cooperation.

"It's for which the summit of the Gulf Cooperation Council has called for financial and monetary unity between member states by 2025," the minister stressed. In this regard, the minister also pointed out that peace, sustainable development, and human rights are the pillars of Bahrain's foreign policy.

The minister also stressed the importance of the speech made by HM the King at the Jeddah Summit, which highlighted the need for stabilising energy prices and supporting initiatives aimed at exporting grain and wheat.

Bahrain, the minister said, believes that sanctions are not a way to solve problems. "Solutions to problems can form only at the dialogue table and through peaceful efforts." The minister also expressed his satisfaction at the restarting of grain export from Russia and Ukraine.