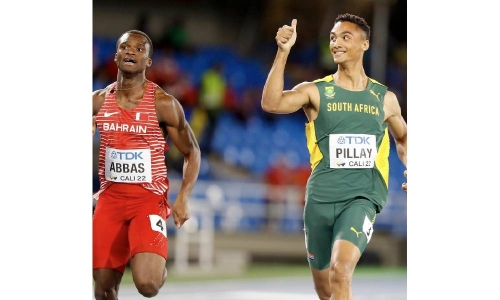 Bahraini sprinter Yusuf Ali Abbas barged into the men’s 400 metres final yesterday at the World Athletics U20 Championships 2022, being held in Cali, Colombia.

The talented 19-year-old made it through as one of two non-automatic qualifiers after finishing the first of three semi-final heats in third place. The top two from each race earned an automatic berth in the medal round, while two other spots were gained by the next two quickest athletes.

Abbas was one of those two after finishing his run in 46.21 seconds. The other to make it through as a non-automatic qualifier was Tyler Floyd of Canada, who was running in the same heat and finished fourth in 46.22s.

Lythe Pillay of South Africa won heat one in 45.61s, while Shaemar Uter of Jamaica was the runner-up in 45.96s. The others to advance to the 400m final were Busang Collen Kebinatshipi from Botswana and Joshua Atkinson from Thailand in heat two; and Delano Kennedy from Jamaica along with Steven McElroy from heat three.

The medal-deciding race was scheduled to be held early today morning at 1.50am, Bahrain time. Abbas was set to run in lane one. He heads into the final with a season’s best of 45.87s, which is also his personal best.

Meanwhile, also yesterday, Bahraini medal hopeful Zenab Moussa Ali Mahamat was unlucky in the semi-finals of the women’s 400m. Competing in heat three, she was disqualified from her race. She had originally finished in second place before being excluded from the final classification, thus missing out on her medal round.

Qatar yet to respond to Bahrain's calls but doors are still open, says Foreign Minister