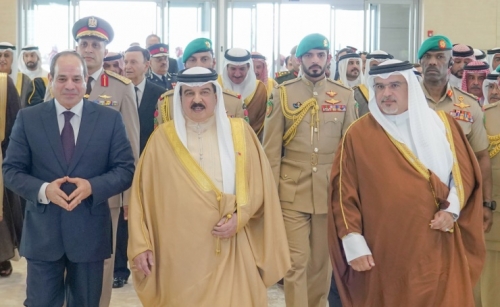 Upon arrival, HM the King, President Al Sisi and HRH the Crown Prince and Prime Minister were welcomed by the Board of Directors Chairman of the Bahrain Airport Company (BAC), Kamal bin Ahmed bin Mohammed, Transportation and Telecommunications Minister, Mohammed bin Thamer Al Kaabi, and senior officials from the management of the new airport.

The guard of honour saluted the three leaders, and Bahraini Ardha songs were chanted to welcome them. On the occasion, Kamal extended thanks and gratitude to HM King Hamad for visiting the airport to patronise the opening ceremony of the new passenger terminal, which is considered the largest infrastructure project in the civil aviation sector in the kingdom, and represents a qualitative leap in the field of services and airport facilities.

He indicated that the project was implemented in a record period of time, and is considered the fastest in building airports in the world, noting that it started in April 2016 and the construction work was completed in 2020, without any problems and within the approved budget.

He affirmed that the project could not have achieved all its goals without HRH the Crown Prince and Prime Minister’s unlimited support and constant follow-up on all its implementation phases. He pledged to spare no efforts in order to continue enhancing the kingdom’s status regionally and internationally.

Asian man sentenced to 10 years for visa fraud in Bahrain