Free press to the fore | THE DAILY TRIBUNE | KINGDOM OF BAHRAIN 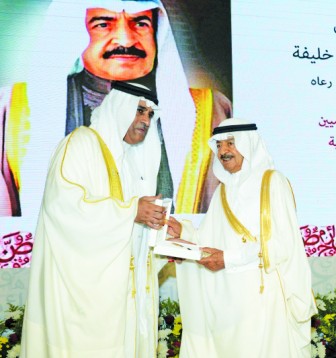 Free press to the fore

Manama Prime Minister HRH Prince Khalifa bin Salman Al Khalifa said that the Kingdom needed an enlightened thought and media discourse that was consistent with modern requirements. “Our focus should be mainly on issues that achieve the citizens’ interests and welfare, which is the ultimate goal for everyone,” he said. He observed that the Bahraini Press had acquired expertise that have entitled it to be a leading school of its own, a school that has its own pattern in expressing the aspirations of the public. As he patronised the ceremony held by the Bahrain Journalists Association (BJA) to honour Bahraini Press and media personnel as part of the Kingdom’s celebrations of the Bahraini Press Day, HRH the Prime Minister extended sincere congratulations to the Bahraini media and Press community. “The Bahraini Press Day is a milestone in the Kingdom’s history,” he said, adding that it was an annual occasion to renew pride in Press and media persons and pay tribute to them for their long march of dedication, intellectual and cultural enlightenment. HRH the Prime Minister added that the landmark achievements of Bahraini Press and mass media have not come from a vacuum, but rather are the result of accumulated work and dedication of successive generations of creative columnists and journalists. He stressed that the openness and freedom prevailing in the Kingdom are the outcome of the enlightened vision of His Majesty King Hamad bin Isa Al Khalifa, who has always been keen on providing the freedom of expression within the framework of responsible freedom regulated by the Constitution and the law. HRH Premier stressed that preparing youth to join Press and media should top every plan devised by the BJA. “The progammes and activities should focus on preparing a new highly-qualified and trained generation of journalists.” He emphasised that the Press remained the most effective and credible in expressing the aspirations of the people despite the diversity and increasing use of social networks. HRH The Premier called upon the media to assume its national role in enlightening society, and strengthening its cohesion. HRH Premier also voiced pride in the role played by the Press and media in tackling and covering national issues objectively and transparently.