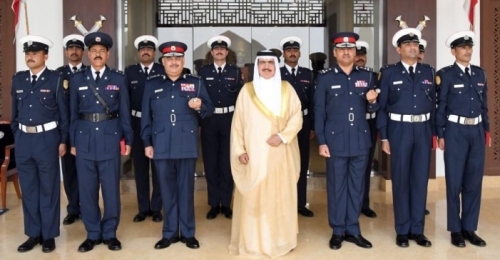 The competition held at British Royal College (Sandhurst) witnessed the participation of 20 teams. Policeman Fathi Naji emerged as the best solo participant for the second year in a row. During the award ceremony, President of the Judging Panel, Captain Rob Beckett of the Coldstream Guards, said, “I think collectively as a judging panel, we have seen one team today that, we’ve never seen anything like before.

They (Bahrain Police) have been absolutely unbelievable; the teamwork, the style, the speed, just everything was perfect, and we couldn’t pick any holes in it.” Receiving the team members, Interior Ministry congratulated them, hailing their performance, determination and work team spirit.

He also hailed the role of the academy in training the team and wished them further success in the upcoming competitions. The Chief of Public Security, Lt-General Tariq Al Hassan and the Commander of the Royal Academy of Police, Brigadier Fawaz Al Hassan, were present.