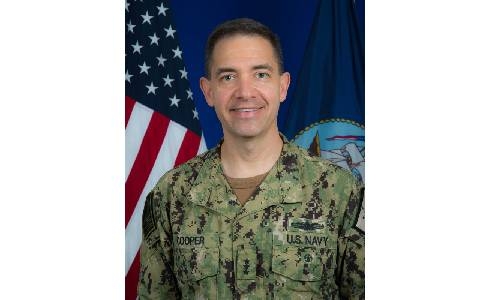 Through the use of unmanned vessels that utilise artificial intelligence technology, the US Navy is enhancing its security operations in the Gulf and the Middle East regions, one of its commanders revealed during an online press conference on Wednesday.

Vice Admiral Brad Cooper, commander of US Naval Forces Central Command, US Fifth Fleet, in Bahrain said that the main focus of American naval operations in the region is to strengthen partnerships with regional allies and expand the use of innovative military systems.

“I would describe our efforts as being focused in two main areas: one, strengthening partnerships, and two, accelerating innovation,” he said.

The US Navy has expanded its partnerships with 34 countries in the region, with Egypt last year becoming the latest, he pointed out.

US Naval Forces Central Command (NAVCENT), established Task Force 59 in September 2021. Since its launch, it has introduced a suite of new unmanned systems based at operational hubs in Bahrain and Aqaba, Jordan. The task force partners with industry and international forces for operational evaluation and employment.

Cooper said the recent formation of the new, multinational Combined Task Force 153, one of four Combined Maritime Forces, aims to improve security in the Red Sea, Bab El-Mandeb and the Gulf of Aden. It will also help foster better working relationships between the US and its partners within its area of operations, which is critical to regional security.

The US navy is looking to expand, in cooperation with its allies in the region, the use of unmanned systems and artificial intelligence within its fleet to improve security capabilities, he added. To help achieve this, Cooper said he established the new Task Force 59 last September.

“Integrating new, unmanned systems with artificial intelligence puts more eyes out on the water that we simply have not had in the past,” he said.

The US Navy deployed unmanned systems in Bahrain and Aqaba, Jordan, last year, Cooper revealed. In February this year, the US and its allies conducted the world’s largest unmanned exercise, called IMX 22, in the Middle East. About 60 countries took part.

Cooper called for greater cooperation between regional naval allies in efforts to utilise new technologies that can help improve security and stability.

“I believe that we are on the cusp of an unmanned technological revolution and this calls for regional navies to work together more closely,” he said.

Cooperation between the naval forces of the US and Saudi Arabia is extensive, he added, highlighting in particular the Saudi role and leadership within task forces established by the US navy and its partners in the region.

“Over a period of years, the Saudis have commanded multiple task forces within the Combined Maritime Forces,” he said. “In fact, this summer there will be a Saudi leader of Combined Task Force 150, which leads our maritime security operations in the North Arabian Sea and Gulf of Oman. So we’re very excited about that.”