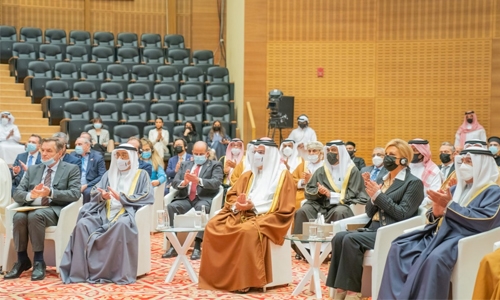 The Kingdom of Bahrain is a country of goodwill and peace, and the Bahraini citizens exemplify conscious awareness, tolerance and coexistence.

This was stressed by His Royal Highness Prince Salman bin Hamad Al Khalifa, the Crown Prince and Prime Minister, as he inaugurated yesterday The First Annual Conference on The Role of Education in Peaceful Coexistence, at the Isa Cultural Centre.

Under the theme of “Ignorance is the Enemy of Peace”, the conference is organised by The King Hamad Global Centre for Peaceful Coexistence and takes place until 8 December, with regional and global educational institutions participating.

HRH Prince Salman, who attended the event on behalf of His Majesty King Hamad bin Isa Al Khalifa, said that Bahrain’s diplomatic efforts consolidate the values of tolerance and openness between peoples and cultures, in line with the visions and aspirations of His Majesty.

He noted the role of the centre in promoting tolerance between peoples.

The centre’s achievements include the establishment of The King Hamad Chair in Inter-Faith Dialogue and Peaceful Coexistence Programme at Sapienza Universita di Roma and King Hamad Faith in Leadership Fellowship Programme, of which the first batch of Bahraini fellows graduated yesterday.

HRH the Crown Prince and Prime Minister emphasised that today’s world requires all to take proactive steps to protect children and adolescents from extremist ideologies through education and promoting tolerance, coexistence and compassion.

He highlighted the Kingdom’s commitment to further developing its education system and ensuring that it caters to the needs of a diverse population.

The centre’s Board of Trustees Chairman, Dr Shaikh Khalid bin Khalifa Al Khalifa, extended his gratitude to HM the King for his patronage of the conference and to HRH Prince Salman for inaugurating the conference.

Dr Shaikh Khalid noted that the conference has been launched as part of the centre’s commitment to promoting the values of coexistence and tolerance in line with the Kingdom’s educational system.

It aims to provide a platform for exchanging ideas relating to the peaceful coexistence of people of different cultures and faiths.

Dr Shaikh Khalid emphasised the need to include values such as religious tolerance, peaceful coexistence within the university and higher education institutions curriculums around the world.

He also called for the establishment of centres and institutions concerned with promoting peaceful coexistence and religious tolerance amongst youth.

The conference highlights the necessity of providing scholarships so that young people from the GCC region can attend The King Hamad Chair for Interreligious Dialogue and Peaceful Coexistence at Sapienza Universita di Roma.

The conference includes four main dialogue sessions focussing on integrating coexistence and diversity within university curriculums, the role of educational institutions in promoting peace, the experiences of those who have attended The King Hamad Chair for Interfaith Dialogue and Peaceful Coexistence courses at Sapienza Università di Roma, and the development of religious education as a pillar of promoting coexistence.