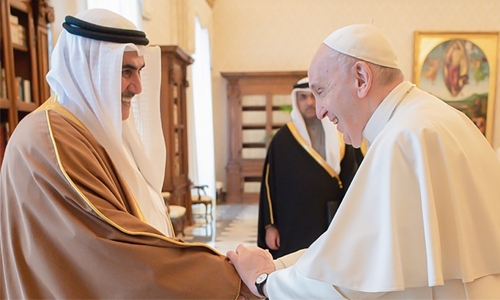 His Majesty King Hamad bin Isa Al Khalifa yesterday extended an invitation to Pope Francis, the Pope of the Vatican, to visit Bahrain.

Pope received the invitation from the Advisor to HM the King for Diplomatic Affairs, Shaikh Khalid bin Ahmed bin Mohammed Al Khalifa, at the Vatican yesterday.

Thanking HM the King, Pope Francis said, “I love and appreciates” the invitation to visit the Kingdom.

“The invitation embodies the status of Bahrain as a role model for openness and coexistence among all its social segments,” said the Pope, appreciating HM King Hamad’s wisdom and keenness to foster the culture of dialogue and tolerance.

Pope Francis further praised His Majesty’s initiatives for consolidating and spreading the principles of coexistence and fraternity.

He affirmed HM the King’s support for the Document on Human Fraternity for World Peace and Living Together and its lofty principles.

Shaikh Khalid conveyed to Pope the greetings as well as HM’s appreciation of the prominent role played by Pope Francis in establishing and promoting interfaith dialogue and understanding among various cultures Shaikh Khalid with Pope Francis and civilisations.