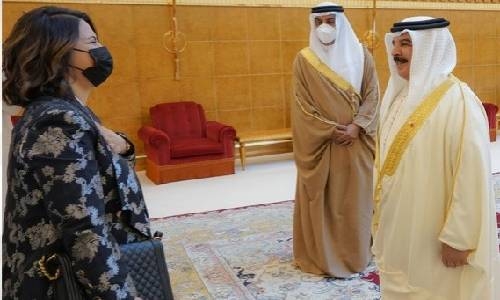 His Majesty King Hamad bin Isa Al Khalifa has lauded the solid fraternal relations of the Kingdom of Bahrain and Egypt and their keenness to bolster bilateral cooperation across various fields for the best interests of the two brotherly peoples.

This came as HM the King received at Al Sakhir Palace yesterday the Libyan Foreign Affairs and International Cooperation Minister, Dr Najla El Mangoush, who is on a visit to the kingdom.

During the meeting, HM the King was briefed by Minister Dr El Mangoush about the latest Libyan developments, and the efforts being made to lead the transitional phase and hold the international conference to support the stability of Libya later this month.

HM the King underlined the kingdom’s support for the unremitting efforts exerted by the State of Libya to lay the foundations of security, stability and peace in all parts of the country.

He stressed the importance of taking steps to support stability in Libya and the exit of foreign forces, in order to preserve Libya’s sovereignty, independence and territorial integrity, as well as holding the scheduled presidential and parliamentary elections to achieve the aspirations of the brotherly Libyan people for development and prosperity.

The meeting also touched on the latest regional and international developments.

Dr El Mangoush expressed her thanks and appreciation to HM the King for the kingdom’s honourable stances in support of her country during the difficult stage it is going through.