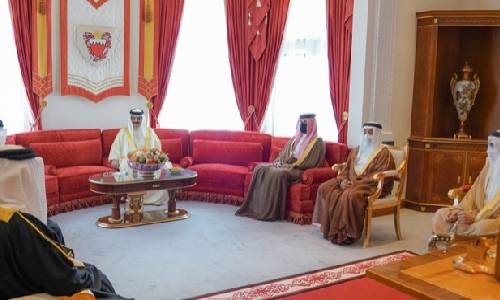 His Majesty King Hamad bin Isa Al Khalifa affirmed the significant role of the Bahraini ambassadors in boosting relations and cooperation with other countries.

HM the King stressed the kingdom’s keenness on building solid relations with other countries that are based on mutual respect.

This came as His Majesty received at Sakhir Palace yesterday Ambassadors of the Kingdom of Bahrain to Sudan and Belgium, Abdullah Rabia and Abdullah Faisal Jabr Al Dousari, respectively, as they took the legal oath before His Majesty on the occasion of the issuance of the Royal Decree appointing them as Ambassadors Extraordinary and Plenipotentiary.

HM the King congratulated them on their appointment, wishing them every success in their new diplomatic duties.

He asked them to convey his greetings and best wishes to the Head of Sudan’s Sovereignty Council and the King of Belgium.

He also directed them to serve the interests of the Bahraini community in both countries and cater to their needs.

The two ambassadors extended sincere thanks and gratitude to HM the King for the noble royal trust.