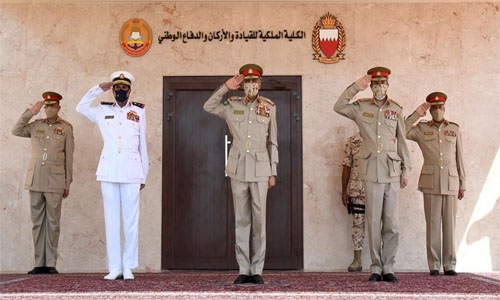 The Commander-in-Chief deputised the Chief of Staff, Lieutenant-General Dhiyab bin Saqr Al Nuaimi, to attend the graduation ceremony on his behalf.

Patronised by HM the King, the graduation ceremony was held at the Royal Command, Staff and National Defence College. The Royal Command, Staff and National Defense College Commandant, Rear Admiral Abdulla Said Al Mansoori, delivered a speech in which he affirmed the forward-looking vision of HM the King and the support of His Royal Highness Prince Salman bin Hamad Al Khalifa, the Crown Prince, Deputy Supreme Commander and Prime Minister, to the BDF to become a military force that is capable of defending the nation’s achievements and capabilities.