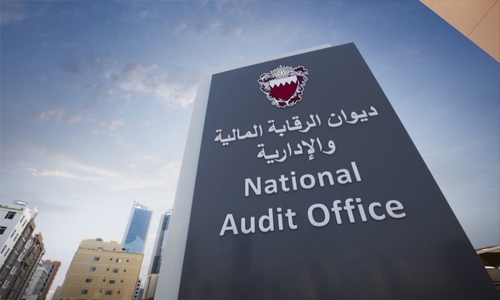 The audited financial report will be presented to His Majesty King Hamad bin Isa Al Khalifa.

Shaikh Khalid commended the efforts exerted by the NAO, one of the outcomes of HM the King's reforms, and praised its outstanding performance in preserving public funds and checking the integrity and legality of expenditures.

He also hailed the NAO's contribution to improving the performance of state ministries and institutions and ensuring the application of the highest levels of productivity, efficiency and optimal use of resources.

He pointed out the NAO's role in protecting public funds and preserving Bahrain's assets by using the best and latest professional practices adopted globally.

Shaikh Ahmed stressed that the NAO's financial statements consolidate its vision as an independent supervisory entity that operates with a high level of professionalism.

The development achieved by the NAO since its inception and its ability to perform its duties are attributed to the continuous support, good guidance and generous patronage from HM the King, he added.

Shaikh Ahmed said the NAO would continue its work with great determination and strong will in order to achieve the wise vision and sound directives of HM the King.

He thanked HRH Prince Salman bin Hamad Al Khalifa, the Crown Prince and Prime Minister, for his support and lauded the close cooperation between the NAO and the various ministries and government entities that it covers.

Shaikh Ahmed highlighted the importance of strengthening the principles of positive approach and partnership, boosting cooperation with all bodies covered by the NAO, and assisting them to improve their performance in accordance with the international standards adopted to preserve public funds and ensure good management.

The NAO will continue to invest in the human elements, develop and train Bahraini competencies to promote work and boost the level of services of all kinds and in all locations provided to citizens, he said.

"The NAO seeks to strengthen its systems to perform its tasks more efficiently, as there are plans and programs for development and modernization that are implemented to keep pace with developments taking place locally and globally and in various disciplines, especially the legal and technological aspects," he said.

"The coronavirus pandemic had effects and repercussions that changed unexpectedly the methods of work at various levels, but this did not discourage the NAO from carrying out its monitoring action in an accurate manner and continuing to carry out its supervisory tasks in a professional way in line with international professional standards and best practices."