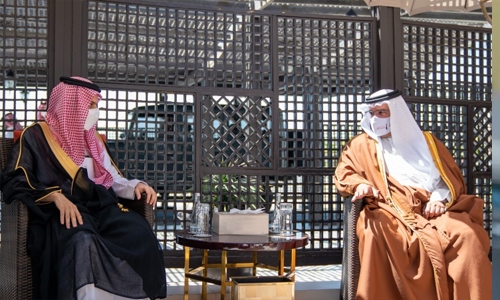 His Royal Highness highlighted the depth of historic ties between the Kingdom of Bahrain and the Kingdom of Saudi Arabia, which continue to receive the unwavering support of both His Majesty King Hamad bin Isa Al Khalifa, and the Custodian of the Two Holy Mosques, King Salman bin Abdulaziz Al-Saud. His Royal Highness noted the importance of furthering relations in support of shared visions and common interests.

His Royal Highness noted that the security interests of both countries are identical with shared objectives in facing various challenges, including combating terrorism in all its forms.

His Royal Highness highlighted the Saudi-Bahraini Coordination Council’s pivotal role in forming joint Sub-Committees to progress the Council’s initiatives, including strengthening economic and industrial cooperation, as well as trade movements across land and sea.  His Royal Highness underscored the importance of the King Fahd Causeway, as vital to maintaining connectivity between the two countries, and the role of the upcoming King Hamad Causeway in furthering economic, trade and industrial ties.

Regional and international issues of common interest were discussed, during which His Royal Highness commended Saudi Arabia’s role in supporting Arab and Islamic nations, as well as its role in safeguarding regional stability and the global economy.

For his part, HH Prince Faisal extended his gratitude for the opportunity to meet HRH the Crown Prince and Prime Minister and noted HRH’s continued support in bolstering Bahrain – Saudi Arabia ties.