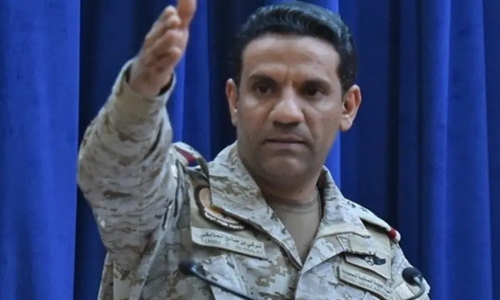 Bahrain yesterday strongly condemned the launch of a ballistic missile by Iran-backed terrorist Houthi militia against Saudi Arabia as a “cowardly terrorist attack targeting civilians.” In a statement condemning the attack, the Ministry of Foreign Affairs praised the Saudi Royal Air Defence Forces and coalition forces, for their readiness and vigilance, in intercepting and destroying the missiles and drones before hitting civilian targets.

Bahrain expressed its full solidarity with the Kingdom of Saudi Arabia for the security measures it takes to deter the Houthi terrorist attacks and protect citizens and residents on its territories.

Media reports said that a missile launched by the Houthis towards the southern city of Jazan was intercepted and destroyed.

These terrorist acts amount to war crimes.” Aramco’s oil production and export facilities are mostly in Saudi Arabia’s Eastern Province, more than 1,000 km (620 miles) across the country from Jeddah.

The Arab Coalition announced overnight that it had intercepted two explosives-laden drones launched toward Khamis Mushait, a southwestern city home to the King Khalid Air Base.

Yemen’s Houthi movement regularly launches drones and missiles into Saudi Arabia, many of which Riyadh says it intercepts.