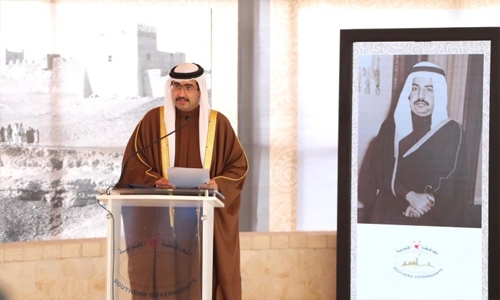 HH the Governor stressed that Riffa will continue serving the kingdom thanks to the directives of His Majesty King Hamad bin Isa Al Khalifa, affirming that the royal directives are beacons for the governorate’s work and a source of its pride.

HH Shaikh Khalifa bin Ali affirmed that thanks to the constant support of His Royal Highness Prince Salman bin Hamad Al Khalifa, the Crown Prince and Prime Minister, the Southern Governorate will carry on its efforts to achieve comprehensive development and meet the local citizens’ expectations.

He highlighted the Southern Governorate’s keenness to implement the directives of the Interior Minister, General Shaikh Rashid bin Abdulla Al Khalifa, to promote the principle of community partnership and communicate with the citizens.

The book launch ceremony featured some holy Quran verses, a 3D film on Riffa’s heritage sites and a poem by poet Abdulla Abdulaziz Al-Ajma. The citizens who contributed to the book were also honoured.

The participants expressed sincere thanks and appreciation to HH Shaikh Khalifa bin Ali Al Khalifa for the efforts he is exerting to consolidate communication with all members of the local society, through creative initiatives, such as the book on Riffa that cements loyalty to the nation.